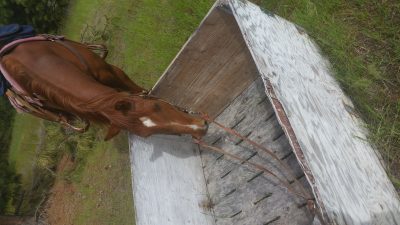 By now we all know things don’t always work as planned.

I was about to step outside and work my gelding when my daughter-in-law texted me from her job at Head Start.

I’d intended on taking a two- to three-hour ride out into the woods adjacent our property.  It was suddenly reduced to one hour.

Cash seemed somewhat spooky when I caught him. I figured since we were preparing for his first Mountain Trail competition in three weeks, it was the perfect day for short skill-building sessions both on the ground and under saddle. I chose 5 tasks to tackle and working first from the ground. 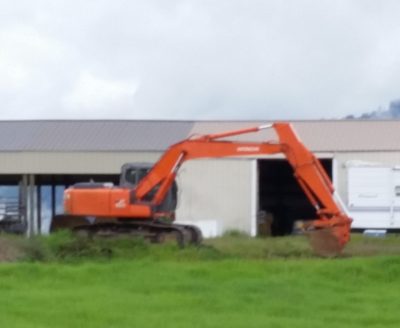 1.  The first groundwork task was to send Cash under the arm attached to the bucket on our excavator. That was simple and he did well, placing his attention on me. From there I noticed the light was on in our shop, so we veered left to turn it off. I sent Cash in and out, allowing him to rest on the concrete floor, surrounded by tools, a riding lawn mower and several deer and elk antlers that covered the wall. With the added pressure of spooky objects, he remained in the shop, eyes darting from me to the antlers, then sniffing the lawnmower. Once his head was down and his expression was soft, we moved on.

2. For some reason, the patio area around our house is the spookiest spot on our property, probably from concrete and window reflections and vehicles. He’d been up there plenty of times, yet each episode seems like the first. We sniffed the pontoon boat and worked on sending him between my truck and our brick retaining wall until he relaxed, holding a soft expression. 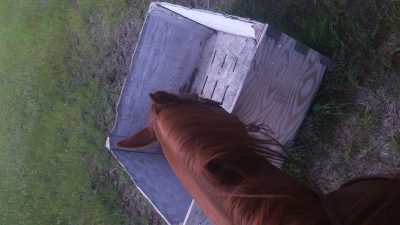 3. It was time to mount. We headed for our middle field, working on opening and closing gates while my fingers remained wrapped around the top of the gate. In competition, if you hand comes off the gate you are docked points.

4. From there we walked over to the grove of pine trees. I love trotting and loping horses around trees. They have to really focus on rider cues and not anticipate each move while holding collection. Soften tends to come quickly. And he was soft and calm until we were a few feet from an apple crate. He dashed sideways, refusing to approach. We’d worked around it last fall and I was not ready for his reaction. Apparently, he’d forgotten about it. He skirted around it as if a bear at full height was threatening him. It took a bit, but he finally approached with caution and figured out it was empty and safe. I continued to work him around in the trees and rest him at the crate, reminding him he was okay.

5. I circled around and went through the north gate and headed for the teeter-totter. We went over each end. This was smooth, as he’s walked over it plenty of times.

6. The final task was to back up a small but steep three-foot hill. Again, something he’s done several times and was a good reminder.

The hour was well spent and even though his saddle pad remained dry, he gained loads of confidence.

What kind of riding do you like? What equine tasks or training tips can you share that work for you?