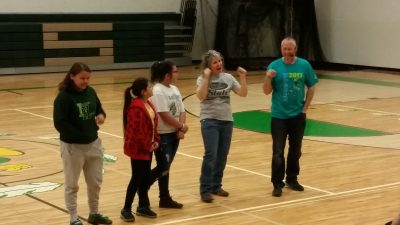 We began the morning with a 9:00 am send-off for the 3 female archers headed for Louisville, Kentucky for the National NASP Archery Tournament: Amaya Simpson, grade 9; Natosha Flett, grade 5; Ailana Pacheco, grade 4.

Kids cheered in the gym then ran ahead of archers, parents, and coaches, forming a human wall that led us out of the school, up the walkway, and to our already packed cars. We were off to the airport and on the 9:30 ferry for a 1:30 flight. 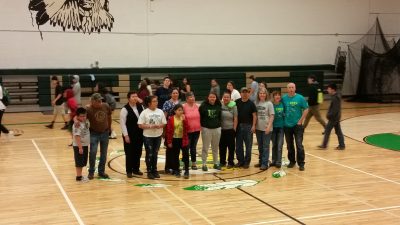 Once bags and bows and arrows were checked in, I prepped the two elementary students for their first flight, telling them it was similar to a carnival ride. I shared what take off and landing would feel like. Their eyes lit up with anticipation and excitement.

They giggled during the entire accent, hiding their faces in neck pillows. The folks surrounding them burst out in giggles and laughter, too. Then they settled in for the flight with a game of UNO.

We arrived at 10:30 Louisville time. It was after midnight before we turned lights out for the night.

We were up early for breakfast as this was our main tour day. As a group, we toured the Louisville Slugger Museum. The girls were fascinated as they watched bats form out of chunks of wood, holding vintage white ash and hard or sugar walnut bats famous baseball players used from as early as 1884. They smelled the wood as chips landed on the cool, concrete floors and listened to the history of making bats and the legends that use them both in the past and present.

From there we split up: Amaya and her mother and grandmother visiting the Muhammad Ali Museum and the other two girls and I headed for Churchill Downs, home of the Kentucky Derby. What a feeling to bend down, grab a handful of sandy soil from the track, and let it sift through my fingers.

We again met up at the Mega Caves for tours and low ropes courses and zip lines. From there we went back to the hotel for swimming and dinner. I mentally prepared myself for lights out, homesickness, and fatigue. To my surprise, lights out went without a hitch. I closed my heavy eyelids, thankful for such amazing student archers.

I thought this day would run as smoothly as the past two had, thinking if they girls could survive first flights, a three-hour time change, and being several states away from home, this would be a snap.

A snap did happen, and it wasn’t the kind I expected. With nerves on fire and extreme fatigue, the 9:50 am shoot for our 9th-grade archer plunged, or so we thought. She began with extremely high 10-meter scores. The live Facebook feeds were running smoothing. It was a thumbs-up moment. Then the 15-meter shot came. Our archer, knowing the entire community was watching, made a shot that she thought was bad because it was not scores filled with 9s and 10s. Until just before I wrote this post did I get to see the final scores. What I saw was not bad scores, yet not desired scores either, and there is a huge difference between the two.

Then the 15-meter shot came. Our archer, knowing the entire community was watching, made a shot that she thought was bad because it was not 9s and 10s. Until just before I wrote this post did I get to see the final scores. What I saw was not bad scores, but not wanted scores and there is a huge difference between the two.

We shut down the Facebook feed at her request and gave her needed space. She completed her 15-meter shots, gave high-fives thick with encouraging words to cover disappointment, and headed to the airport for softball playoffs.

The elementary girls were scheduled to shoot at 1:30.

We bid our time by eating lunch, took practice shots, and wrote in their journals. Then the tears came for our fourth-grade archer. She didn’t want to shoot. I texted a couple prayer partnersenlisting them to pray for our fatigued, nervous, homesick girl and pray for wisdom and patience over me. I took a deep breath, remembering a promise of ice cream following their shoots. I convinced the girls to take a walk with me. We circled an area behind the bleachers, discussing ice cream flavors and what else they wanted to do after completing their shots. 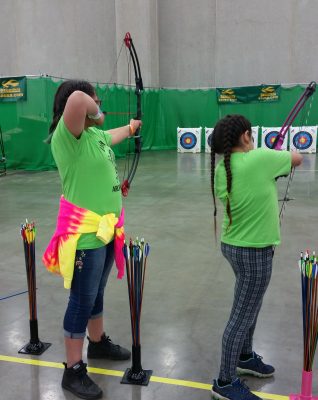 Score cards were handed out, bow strength was tested, and arrows were distributed. They were ready.

I reminded them to have fun and of the promised ice cream–just for good measure.

I grabbed the extra arrows coaches are required to have on hand in case of a broken or dropped arrow and took my spot behind the coaches line. 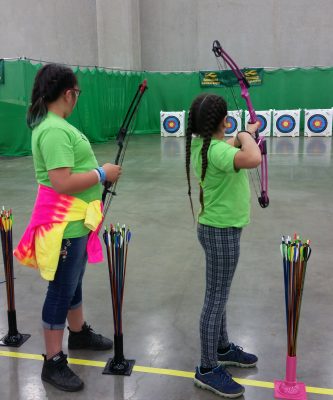 Again, we were Facebook Live. Our music teacher brought the 4th- and 5th-grade classes into the music room and set up his big screen so classmates could watch. I kept that from the girls at first. When they discoverd they were live, it didn’t phase them one bit. They waved and talked into my phone to classmates, parents, extended family, and community members who were able to tune in.

The girls shot and had their promised ice cream.

We spent the rest of the day swimming and resting. 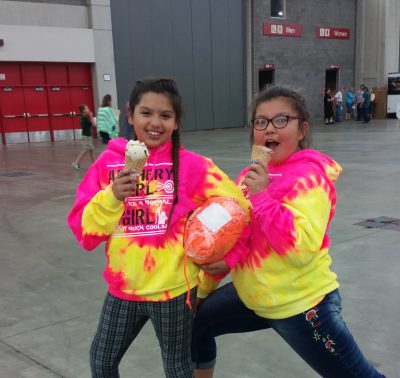 In hindsight, we would have flown home this day and not took the extra day to relax and explore. We were all tired and homesick. With my husband gone during the week, I really wanted to be home knowing he was.

But I pulled up my cowgirl boots and took the girls to a movie. After watching Boss Baby in the theater, we drove around the country, taking note of the brick homes, farms, and difference of landscape. I drove while they recorded sights and thoughts in their journals, stopping for pictures of fun homes, landscapes, and horse farms.

Once they swam and ate, we packed. Lights were out early as we were to be up at 6:00 am.

I was thankful the girls got up when asked. By now we were exhausted, not quite used to the time change, homesick, and grouchy. We ate, fueled the rental car, and circled the airport until we found the correct entrance to car rental returns. I had to bite my tounge a few times, thinking my phone GPS was messing with me.

Cranky attitudes flaired, but we managed to get though the two remaining flights with a single meltdown.

Would I do this all over again? Absolutlely. The girls were fun and well mannered. They encouraged one another, giggled profusely, and kept me on my toes. Not only would I do this again, but hope to have qualifying archers next year. Nationals will be spit and our half of the nation’s tournament will be held in Salt Lake City, Utah.

After debriefing this morning with the other 2 coaches, we have lined out plans for next year. With all the variable, our girls had outstanding archery shoots and an experience of a lifetime. The entire town could not be more proud.

Thank you to all who supported our archers: fincncial support and blog and Facebook comments, and yes, I read them everyone.

~And remember: Join Me and Let’s Gallop into Adventure!