Today we are exploring various kinds of traps men used to trap animals for their furs to trade at the Hudson Bay Companyin the Kettle Falls Area.

For those of you who are just joining in, here is the scoop on the Fur Trade Festival:

Every year the Lake Roosevelt National Recreation Area’s education specialist, Janice Elvidge, heads up the Fur Trade Festival at the Kettle Falls Historical Center and Mission Point that perches above Lake Roosevelt at Kettle Falls, WA which is a section of the Columbia River from Grand Coulee Dam to the Canadian border.

This year was the fourth annual event for grades 3-6 held June 2, 2014. Sessions this year included: Furs of the Fur Trade, David Thompson and David Douglas at the Kettle Falls, Fur Trade Tools, Traps, Fire and Firearms, Fire Starting and Rope Making, Indian Sign Talk, and Tools and Women of the Fur Trade.

Area schools and their classrooms participate.  I think I was the only program coordinator/teacher who brought an after school program––Rez Stop (Raising our Educational Zone and Standing Tall On Pride). So we actually had grades 3-7 represented in one group and the students had an exciting and education time learning about the old days and how people survived and traded.

Now, onto the traps themselves. 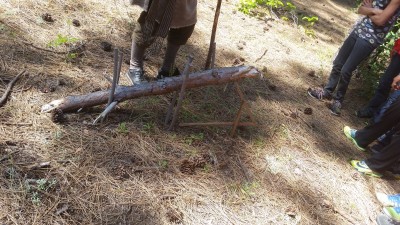 Did you know that 90% of the traps used were made with sticks and other materials found on site? Yes. That is correct––90%. There are four types of traps that were shown to the youth at the festival; three of the four traps were made of stick and trigger:

All of this seems very crude, and I guess it is, but the pelts were worth a lot of money as they were used for clothing in those days. Bullet holes would only mangle the pelts, thus deeming them unsaleable.  Remember, this is how many men made their living and fed their families.

I know snaring is popular for catching small game and is the method I chose for my up and coming young adult novel. Fathers taught, and still teach, this method to their sons. It’s not a bad idea to know, especially if one is caught out in the wilderness, no cell service, no gun or bullets, no bow and arrow, no fishing hooks and runs out of food.

Next week we will talk about starting fires, not forest fires, but fires that could be useful in the forest with no or wet matches.  I will also take you on a rope walk. The kids sure had 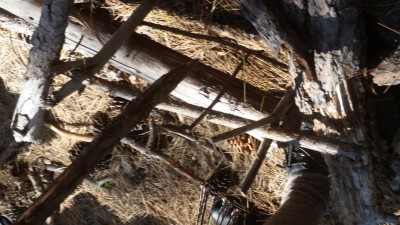 fun! And even us adults leaned a little about cording.

Thank you for stopping by and see you next time!

The Fur Trade Festival is sponsored by: