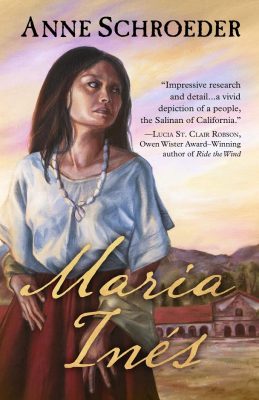 Welcome to Maria Inés, an aboriginal woman who struggles to survive while she reclaims her family, her faith, and her ancestral identity by Anne Schroeder.

Today I have the pleasure of introducing award-winning author and Women Writing the West member Anne Schroeder and her novel Maria Inés.

I find the Salinan people from the southern California coast featured in Anne’s novel intriguing as it parallels my husband’s Sinixt people originating from British Columbia, Canada. Both tribes have been deemed extinct and both are fighting their respective governments to reclaim tribal status.

How Maria Inés Wrangled Anne Schroeder into Writing Her Story

My story began with a huge valley oak that demanded my attention on walks along a rural road. It exerted an energy field that made me stop and stare into its tall branches, hypnotized by something I could sense, but not understand. I spoke to a Salinan woman about it and she smiled. “That road is the ancient path to Ma Sa Mo, the place of the beginning at Morro Rock, where we believe we swam ashore and grew legs and walked onto the sand. You have been chosen for something. Be still and you will learn what it is.”

I had been chosen to write this series about a young Salinan woman born at Mission San Miguel, in California’s Central Coast.

Why me? Why not. I thought about how this story had dogged me. At 19, I tagged along on an archeological dig when they widened US 101, (El Camino Real, The King’s Highway) that stretches from Mexico north through the Mission lands. In the years that followed, I visited missions, including tagging along on a 4th grade field trip with a docent who shared ancient trivia. I trained as a docent and received a guide book filled with rare facts. On a lark, I spent two weekends in a former padre’s cell at Mission San Miguel. I attended Salinan concerts at the same mission, with music played on traditional instruments. I cornered an old bell-ringer at Mission San Luis Obispo and got a tour and a lesson on how the early Indian boys were deafened by the sound. (They learned to play by memorizing this ditty: The beans is done, the beans is done. You best get in line before the beans is gone.)

I took a course on California Mission history and peppered the instructor with questions. I ponied up $100 to attend an authentic Californio dinner, La Mesa de los Padres, and dined as the Spanish dons did in 1795. I slipped into a classroom at Cal Poly to attend a lecture and food sampling of authentic Mission times. I spent a day making adobe bricks to repair Mission San Miguel after the devastating earthquake of 2001. Attended a Salinan tribal council meeting. Attended winter Solstice events after the Salinan reclaimed their right to climb Morro Rock, after the State of California declared it off-limits in order to protect the peregrine falcons that nest there.

I met an elderly lady who was living at the assisted living facility that my mother-in-law was also in. She had a brother who had written a few books on the folk tales, the Salinan stories and the Bandido era of California, and she happened to have a few copies that she gave me. Those books were invaluable to me. I met a Salinan tribal elder who makes traditional shakers and who helped with the nuances of the story. I took a jeep trip through the old Salinan rancheria lands and saw the sacred mountains and springs, the secret painted caves and the places where the hechiceros,  the wizards, summoned the devil, who transformed itself into a lizard and spat blood at people and made them die.

I read a dozen or so books that contained facts and figures until I “got” my subject matter. Most of my reference books came from Mission museum gift shops and old adobe museums that pepper the California coast. The bibliography in one book would suggest another book. I tracked them down, once in an antique store in Pacific Grove that was closing out its book section. Most importantly, I am a practicing Catholic. I understand how it is possible to both revere and resent a powerful patriarchal power, and this enabled me to write the full story.

Gradually, what I learned merged with what I felt—and became what I know. That Maria Inés channeled me to tell her story. When I started this series I went to a group of Salinan elders, all women, and said, “I want to tell your story.” They nodded and I continued. “I want to start at the beginning. And it seems like, for you to be standing here today, your great-great-great grandmothers had to have been . . . raped . . . by Mexican soldiers?” I stopped and waited while total silence greeted me.

FINALLY, one of them nodded and said, “We don’t like to talk about those things.”

Another period of silence, but this time the one who spoke glared at one of the others until she, too nodded. “Our blood became strong.”

The atmosphere lifted and they each began talking. So that is where the story begins. 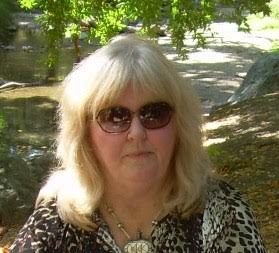 Anne Schroeder writes memoir and historical fiction set in the West. She has won awards for her short stories published in print and on-line markets. She was 2015 President of Women Writing the West and lives with her husband and new Lab puppy in Southern Oregon where they explore old ruins and out-of-the-way places. Her new release, Maria Ines, is a novel about an Indian girl who grows up under Padre Junipero’s cross and endures life under the Spanish, Mexican and Yanqui conquest of California. http://www.anneschroederauthor.com

Where to find Maria Inés:

Five Star publishes in hardback library and Kindle formats. If you want, request that your library order a copy from their distributor. It’s in the current catalog.

Remember the valley oak that began this journey? A month after Five Star Publishing accepted the book for publication the tree split at the roots and fell into three sections. Woodcutters rushed in. Within two days it was gone.

You can read the first chapter on Anne’s blog or on Amazon. This is a series of stand-alone novels that include Cholama Moon and Maria Inés. I’ve already finished the third, The Caballero’s Son, and it will be released by Five Star Publishing late next year if I’m lucky.

Leave a comment and be entered in a book giveaway.

Thank you for visiting.