Character’s come alive to writers in their imaginations, as do plot and theme. But at times, it can be a big challenge to keep everything straight. Computer programs for authors to keep track of scenes and charts for characters are available at the writer’s fingertips, but I got hooked on character boards while writing my Heart Trilogy. I found myself having trouble remembering my character’s names and keeping them straight especially since they are traditional American Indian names written in the Native Language. Then once I added in horse’s names and their descriptions, all manure hit the stall walls.

I heard of the idea of creating these character boards at a writer’s conference in Spokane. So I ventured out to Wal-Mart and bought two huge 24” X 36” peg boards and filled them up with 4” X 6” index cards with my character’s names and life stories on them as well as pictures of settings, horses, and people. I now had a system I didn’t have to wade through. All I had to do was look up on my office wall and gather the information I needed. 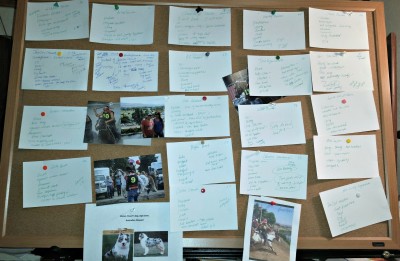 I did not use a character board for my young adult survival book entitled Delbert’s Weir because there were few characters and I already knew the setting. However, I did use easel pads to keep scenes and character straight.

Before I began writing my fifth book, which is my work-in-progress, I typed out most of my characters and their life stories. I bought a couple three ring binders, page separators, and clear project sleeves (information gleaned from a Women Writing the West Writer’s Conference). In one, I placed my characters, interview notes, pictures of horses, art, the Omak Stampede and Suicide Race notes and printouts, and other research as it came to me and was complete with dividers.

In the second notebook, I have a few pictures and the printed first draft of my manuscript ready for edits, I print as I go and have edited at the airport or on a plane thus far. 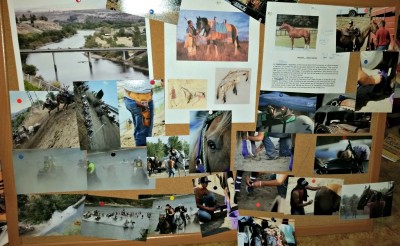 I found turning pages back and forth got quite annoying. So on a flight to visit my youngest son, I wrote out index cards of my characters and used these in the airport and on the plane––a great distraction since flying is not on my list of desired modes of transport. I bet by now you’re asking the computer why I didn’t use those same peg boards as you’ve read about this essay. Well, I have other stuff pinned on one board that inspires me as a writer and as for the other, I think my husband gave it to one of our sons for pictures and whatnot.

One day, not long ago, last week actually, my husband picked up two more peg boards for me while he was in Spokane. I just finished pinning those blasted character (at least the major players) index cards, pictures, and horse and dog info on my boards just before deciding to write this essay.

They are indeed inspirational!

Do you have a character board in your office of writing space? Or if you are not a writer, perhaps an inspiration board of your goals and dreams would help. Try one out. It can be any size. It can be any shape.

I’ve sure enjoyed watching my characters and setting come alive on my two peg boards of inspiration. I’ve even just sat with music playing by candlelight, and soaked in the pictures that put me in my story as if I’m the main character, then begin to write, allowing the words flow like clear creek water.

~ Success is liking yourself, liking what you do, and liking how you do it. ––Maya Angelou