Strong women have always influenced the history of the west. They had to in order to survive. Mourning Dove, an Arrow Lakes enrolled woman of the Colville Confederated Tribes, was no exception. She was a trailblazer. Christine Quintasket, her given name, was the first female American Indian novelist, and the first woman elected to tribal council. Storytelling and legends have been passed down for centuries by elders, and they’d caught her eyes and ears from an early age. Later in life, a spark ignited and she began writing.

Mourning Dove’s life was never easy, especially at birth. She was born in the Moon of Leaves, or in April, of 1888 in a canoe on the Kootenai River

near Bonners Ferry, Idaho; survival ran in her veins from the beginning of her life. Enrolled as Sinixt (Arrow Lakes), she really identified as Okanogan, both bands are of the Colville Reservation and similar in customs and language.

She learned to read by examining dime-store novels. Her mother died when she was a tender 14 years old and she was left to help raise her younger siblings. Fluent in the Salish language, she pressed herself to learn to write in English. And by 1912 she’d drafted her first novel. Unfortunately, she stuffed it in a corner for many years.

By 1927, Cogewea, the Half-Blood was published which is the story of a half-blood girl caught between the worlds of Anglo ranchers and full-blood reservation Indians. She finds herself wedged between a spineless easterner and fraudulent half-blood cowboy who happens to be the best rider on the Flathead reservation and jammed between book learning and the folk wisdom of her full-blood grandmother. This book is known for shattering Native stereotypes as stoic and unfeeling.

Mourning Dove when on to pen Coyote Stories and Mourning Dove: A Salishan Autobiography. She worked hard to promote the welfare of American Indians, fighting in courts for their rights and paving the way for women to serve on tribal council. She didn’t have a life of leisure: in fact, after backbreaking days of working in orchards and fields all day, she would slip into a tent or cabin and write at night. Despite both financial and emotional adversity, she persevered in her goal of creating stories that give Natives a compassionate hearing.

In 1936, she died, worn from chronic illness and fatigue. She left not only a legacy for her family, but for future generations of young women, fighting for their aspirations. Mourning Dove left a spirit of hope to those who will pick it up and run, full steam ahead, into the dreams given to them.

I’ve had the honor of watching her younger generations thrive at work, in school, on the pow-wow floors, dancing to the drumbeat that livens the heart and honors her memory. Her heritage clearly lives on. 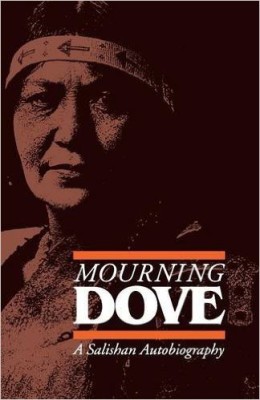 ~ “Everything on this Earth has a purpose, every disease an herb to cure it, and every person a message. This is the Indian theory of existence.” ––Mourning Dove