One woman’s desire to celebrate the Barnaby Island Drummers blessed them with custom-made ribbon attire.

Tena Putnam spear-headed a group of women to gather together and sew nine ribbon shirts, skirts, and vests for the drum group, including a pint-sized wing dress for one of the drummer’s preschool-aged daughter, Queenie.

Lead drummer Clem Nicholas was thrilled to receive two ribbon shirts crafted by Putnam over the summer, so when she approached him with the idea of every member receiving one, he didn’t hesitate.

“I wanted them to look like a group,” Putman said when we met at Inchelium’s Senior Meal Site for interviews and a photo session. “Barnaby Island (Drummers) are dedicated and faithfully practice every Tuesday evening, are a group devoted to sobriety, and a good example of community spirit.” The group is invited to drum in the Northwest and Canada and Putnam’s desire to gift them with tailor-made apparel for their dedication was a well-worth project, and Putnam felt they needed further recognition for their efforts.

“We feel like a united group now,” agreed the Orton brothers.

The group drums at various powwows, graduations, celebrations, and funerals and now feels cohesive while doing so.

“My daughter inspires me to get out and do stuff,” said Valery Ferguson. And “get out” and represent the community in a spirit of pride is what they do best.

“We started December 2018 and finished the beginning of April 2019,” Putnam said. All materials and time were donated to this stitched project of love, and those sewing did so as their schedules provided. Finding time to sew, making decisions dealing with dress options, creating custom patterns from existing shirts and skirts, and fittings were all that strung the project along. 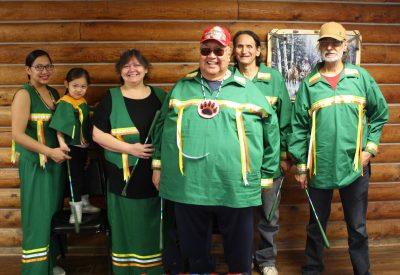 Nicholas wanted to honor the community with the high school Hornet hues of green and gold so the base of the fabric is green with yellow ribbon. Orange and white ribbons were added for complimentary color. His loyalty and pride of community are felt in every beat of his drum and song from his lips. As does his fellow drummer, which is why it was such a simple decision for Putman and the other sewers to offer such a gift.

Bobi Lee added, “Ribbon skirts are not traditional; they are a contemporary expression of culture.” The meaning of the design of the garment belongs to its creator or owner and like dresses, the skirts are a symbol of honor and respect. 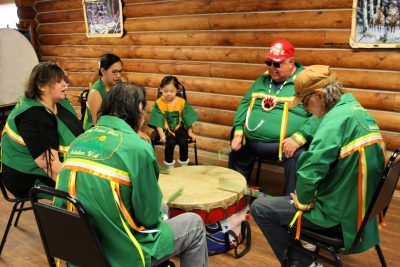 The 2018 event that touched Nicholas the most, was when the group was invited to drum in Seattle with his fellow Peace Maker’s elder-mentor buddy for a celebration honoring graduates from the Peace Maker’s Healing and Wellness Program, which is a program that pairs Native elders with those willing to overcome addictions and other life’s struggles.

And it is with said respect and honor the Barnaby Island Drummers hit the powwow trail in their new outfits. Upcoming events the group are scheduled drum at include: Unity Powwow in Omak on May 18 and 19, Arrow Lakes Powwow in Inchelium on Memorial Day weekend, Fourth of July powwow in Nespelem, WA.

What’s next for Putnam and the Barnaby Island Drummers? A new drum case, which is now complete, and stick bag. Who knows, perhaps they will receive jackets next!

This article was first published in the May 2019 issue of Silverado Express, Colville, Washington.