Welcome Andrea Downing! What a remarkable woman. We met at Women Writing the West and I’ve come to adore Andrea as a fellow writer, author and lady. I asked Ms. Downing to share with us about her writing and research and this is her story…

WRITING, RESEARCH AND ME
As any author will tell you, writing is a solitary business. But don’t confuse
solitude with loneliness; when I write, I’ve got a bunch of people in the room—or at
least in my head. My exterior world, however, has to be pretty much isolated. No
music, no distractions. I did once write for a few days with builders refurbishing
my kitchen, but I can tell you it wasn’t a happy time. Characters rebelled,
demanding my full attention and requesting that I put a stop to the noise and
disruptions.

One of my favorite places to write is at a small place I happily own in
Wyoming. Despite its slightly interrupted view of the Tetons (those pesky trees!),
the peace and quiet I find there, supplemented by fresh air and wide open spaces, a
backdrop of unparalleled beauty—a vista that refreshes my soul—absolutely feed
my mind and creativity. But can you write about Texas, say, while sitting in
Wyoming or New York?

I’m a firm believer in getting the sense of a place. Nope, I haven’t got a time
machine and can’t travel back to the 1800s for an historical book, but visiting the
setting of a book for me is a must. One gets a feel for the area, the ambience, the
wildlife, the scenery, the plants—even the way the sun looks or the moon shines.
You get to know the people, their accents, their local concerns, their sense of
community. Most importantly, your imagination gains another perspective—a
sense of what it’s really like to be there.

My contemporary novel, Dances of the Heart, was the result of several
ideas coming together at once. I listen to country music and started thinking about
the Texas Twostep.

That, in turn, led to the idea of two couples and, needless to
say, Texas. Around the same time, I had been introduced to someone whose son
had sadly lost his life saving others in Afghanistan. Added to this was the fact that
my own daughter, with whom I travel fairly frequently (indeed, she did the driving
on the research trip down in Hill Country), was going away to live in Colombia for
three years, leaving me with my own sense of loss. What feeds the imagination of
an author and what results from that sustenance can never be predicted; in this case,
it proved to be several totally unrelated events.

So, my daughter and I headed off to Texas Hill Country for a long weekend
in order for me to flesh out what I knew about my chosen setting. As I did so, the
characters also became more real: people listening to the music at Luckenbach,
ranchers visiting a fair, the folks in a restaurant in Bandera, and my own daughter’s
wisecrack about a honkytonk all went into the book. Added to this was advice
from two born and bred Texans; this included a strange assortment of everything
from information on alarm systems employed on ranches to an aphorism I used as a
line of dialog.

Writing may well be a solitary business, but it’s one where you’re never
truly alone. 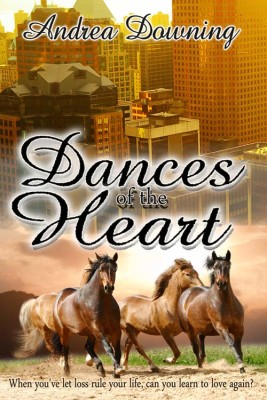 Now to Dances of the Heart:

Successful, workaholic author Carrie Bennett lives through her writing, but can’t
succeed at writing a man into her life. Furthermore, her equally successful but cynical daughter,
Paige, proves inconsolable after the death of her fiancé.

Hard drinking rancher Ray Ryder can find humor in just about anything—except the loss
of his oldest son. His younger son, Jake, recently returned from Iraq, now keeps a secret that
could shatter his deceased brother’s good name.

On one sultry night in Texas, relationships blossom when the four meet, starting a series
of events that move from the dancehalls of Hill Country to the beach parties of East Hampton,
and from the penthouses of New York to the backstreets of a Mexican border town. But the hurts
of the past are hard to leave behind, especially when old adversaries threaten the fragile ties that
bind family to family…and lover to lover.

Carrie let the screen door close quietly behind her and sat on the steps, the cool glass
still in her hands. Peering up at the canopy of heaven, she suddenly experienced a sense of being
so small, infinitesimal; it was as if the world loomed over her, spreading out from the one axis of
her being. Rather than celestial entities in the infinity of space above her, to Carrie, the stars were
holes in the fabric, entries to the endless expanse beyond, gateways to other worlds of which she
would never be a part.

The lights inside switched off and, for a moment, it appeared as if Ray had gone to bed.
“I’m sorry.” His voice came through the screen. The words were hoarse with drink and pain. “I…
Can I join you?”

He came out and carefully lowered himself onto the step, the coffee in his hand slopping slightly
over the side.

He set the mug down and stretched his legs forward, hands coming to rest on his thighs. “Robbie
died in Afghanistan,” he started. “He was my eldest. It was five years ago, you know, and the
pain is as fresh now as it was then. You never expect…you never think your kids are gonna go
before you and all. And then Jake went off to Iraq, well, see…” He hesitated. “I told them, I said
you take, but you give back. That’s what we do, we give back to our country, we serve. Robbie,
well, Robbie just wanted to breed his horses—those damn Arabs meant everything to him, but I
told him he had the…” There was a gulp of tears fighting to come out, the assault on a man’s
pride he tried to cover. “I told him he had the rest of his life to breed those horses. I said every
man in this family has served his country, and he wasn’t going to shame me, he wasn’t going to
be the exception.”

“You served in Viet Nam, didn’t you?” Carrie lowered her voice to the whisper of a secret.

“Yeah. Right at the very end. I was lucky, I guess. Got over there just about in time to get out.”
Ray tapped his hat back, then must have thought better of it and took it off, laying it carefully on
the step beside him. Strands of damp hair lay plastered down the side of his face, but he made no
attempt to push them back.

“He was on guard duty, him and another kid. Some truck driven by them suicide bombers came
at them laden with bombs, trying to get into the compound where all his buddies were. ’Course
the two of them could’ve run away, could’ve stepped out of the way, but that’s not what you do,
is it? They blasted the truck to stop it, blew it up outside to save the lives of the men inside that
compound. Now, his mama has his Distinguished Service Cross and the flag that draped his
coffin, as if that would make amends.” Ray cleared his throat, a sob mixing with his speech and
anger. “But you know,” he went on, covering his mouth as if it would stop the tears, “you know
it was my damn fault. I mean, what the hell difference would it have made if Robbie hadn’t
gone, hadn’t of served? And what the hell are we doing there anyway? I mean, Viet Nam,
Afghanistan, Iraq, what the hell are we fighting in those countries for? It’s meaningless, it’s just
dang foolishness is what it is, kids dying for nothing…nothing at all.”

“Of course it has,” Carrie assured him. “If Robbie hadn’t gone you would—”

“Oh, I know. I would’ve been angry with him for the rest of my life, been thinking what son of
mine could do that, stay back. I’d’ve been shamed.” He sighed and glanced over as if noticing
for the first time she was there. “I married Leigh Anne ’cause she was pregnant—that’s what you
did, the right thing. You get a girl in the family way, you damn well married her. I’d been a kid
when I went to Nam, and when I got back, I was quite a hellraiser.

Went all over the place, doing the rodeos, workin’ ranches. Then I got back here, and I was just taking over the ranch.

Hardly had a dime to my name in those days, but you did the right thing. Well…” He ran a finger
along the line of a crack in one of the steps. A hint of his earlier humor flashed on his face. “Is
this when you New York folks say, ‘Thanks for sharing?’” he quipped.

Andrea Downing has spent most of her life in the UK where she developed a
penchant for tea drinking, a tolerance for rainy days, and a deep knowledge of the London
Underground system. In 2008 she returned to live in the city of her birth, NYC, but
frequently exchanges the canyons of city streets for the wide‐open spaces of the West.
Her love of horses, ranches, rodeo and just about anything else western is reflected in her
writing. Loveland, a western historical romance from The Wild Rose Press, was her first
book and a finalist for the RONE Award for Best American Historical in 2013. Lawless
Love, a short story, part of The Wild Rose Press ‘Lawmen and Outlaws’ series, was a
finalist for Best Historical Novella at the RONE Awards and placed in the 2014
International Digital Awards Historical Short contest. Dearest Darling, a novella, is part
of The Wild Rose Press Love Letters series, and came out Oct. 8th, 2014. It won ‘Favorite
Hero’ along with Honorable Mentions for Favorite Heroine, Short Story and Novel in the
Maple Leaf Awards. It has also won The Golden Quill Award for Best Novella and placed
third in the International Digital Awards for Historical Short. Dances of the Heart, her
first contemporary novel, came out in February, 2015.

Thank you, Andrea Downing for sharing yourself and your writing with us today!