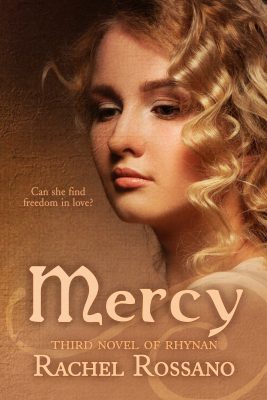 I am thrilled to have Rachel Rossano with me today. Not only is she an amazing author, but she is also a gifted designer and has created six of my book covers. Speaking of book covers, isn’t the cover of Mercy stunning! Elegant and classy are words that come to mind when I gaze at the woman on Rachel’s cover.

Now, to learn more about the author, her life, and her new release, Mercy.

Tell us about yourself.

I live in the northeastern US where the winters are cold and the summers are hot. I have lived here 23 years, the longest I ever lived in one place in my life.

What do you do for fun?

Writing, reading, crocheting, movie watching, and art/crafts in various forms all fill the parts of my life not filled with family and homeschooling my three kids.

Who is your favorite author or book?

Oh, this is a hard one. I have so many I enjoy. My favorite author is Diana Wynne Jones and I reread some of her books at least once a year. My favorite book after the Bible, though, is probably still Jane Eyre.

What is your preferred genre?

I read a wide variety of genres, but my favorite is romance, but I am picky about my romance books.

How did you start this journey to become a writer? What is the message of your book/books?

I started writing as a teen but didn’t take it seriously until college. I wrote my first publishable book in my early twenties and never looked back. Writing is therapeutic and relaxing for me. I love spending time with my characters and their stories.

Mercy is a story of second chances and showing mercy to people who don’t deserve it. The whole Novels of Rhynan series so far have been books focused on characters who demonstrate specific traits. Both main characters in Duty are motivated by their senses of duty. In Honor, the Earl of Dentin is driven by his internal sense of honor and Elsa struggles to honor her parents despite their unreasonable demands on her. Mercy is similar. Both Wilard and Constance demonstrate mercy to their family members.

Tell us about your current book. Make us want to read it.

Constance is a struggling single mother determined to make a better life for her son and herself. By necessity, she has been living in her father’s house as an unpaid servant for years, but the family’s journey to the capital city promises to be a chance at financial and physical freedom from her father’s oppression.

Wilard also grew up in a difficult home. He hasn’t lived with his parents for a long time, but he still bears his father’s name and struggles with the reputation that comes with it. Determined to distance himself from the stigma of a money lender, Wilard has taken work with the Earl of Dentin.

On the journey to the capital city, these two struggling people encounter each other. Circumstance repeatedly throws them together until disaster strikes. Constance’s father is abducted, leaving her, her son, and her younger sister defenseless on the road. Wilard and his companions step in to help, but their assistance causes even more issues.

Why would ruffians abduct an artist on the road? How is the Earl of Dentin involved? As the pair try to search out the truth, they discover a plot that reaches all the way up the king of Rhynan. Will Constance accomplish her goal of building a home midst all of the chaos?

What is the inspiration for your current book?

We were studying medieval art as part of our homeschooling one year. Researching the processes of the creation of paints inspired me to consider writing an artist into my next novel. That is how Constance was born. A woman with the skill with the brush to impress an Earl and the spunk to fight for a better life for her son despite overwhelming obstacles.

Who was your favorite character to write and why?

I suspect it is the Earl of Dentin. Even though he is not the main character in Mercy, he has claimed an active role in every Novel of Rhynan. He is a strong, stoic, confident, and politically powerful man motivated by honor, but he is also caring and observant. His relationship with his wife is especially enjoyable to write since she offers constant insight into the real man behind the grim and stoic exterior. He enjoys helping others, but he expects those he helps to use his help wisely. He also sacrifices a great deal for his country and his king. He doesn’t do it out of a desire for personal gain but because not doing it would throw the whole nation into chaos and hurt so many.

Is there anything of you in that character?

I would hope to be like Dentin in that he is proactive and observant of the needs of others. He doesn’t wait to be asked for help. I am definitely not a grim person, but I do have a bit of a stoic streak.

What sets your book apart?

Although Mercy is a romance, there is a plot, intrigue, and depth beyond just the two main characters’ relationship. The book is about more than just a happy ending. It is about family, both blood and chosen. Hopefully, it also helps others in dealing with difficult family situations as well.

What’s your favorite part in the book?

One of my favorite scenes is when Constance meets Dentin. Also, I enjoyed a different scene where Wilard discovers what he truly desires, and Dentin demonstrates he is a bit territorial.

What was the most difficult part to write?

Probably the ending wins that honor for this book. My husband and editor rightly insisted on some changes to improve it, and I struggled quite a bit with rewriting parts of it. I really don’t like rewriting parts that have been finalized for a very long time. They get cemented in my head and everything alternative then feels wrong.

How do you write? Do you have a set time or place? Write to music? How many hours a day?

I write whenever I get a chance. Mostly it is stilling on the couch in the family room after the kids have gone to bed or in a busy restaurant once a week. I sometimes write to music, but it is usually instrumental only. If I could manage it, I would write hours every day, but that rarely works out. If I get three to four hours in a week, it is a good week.

Why did you want to be a writer?

I love to write. From the development of the idea to the forming of the characters to the coming together of it all into a story, I love the whole process. Since I have been doing it so long now, it has become a bit of a habit, one I don’t intend to give up any time soon.

How can readers get in touch with you?

I have a website (www.rachelrossano.com) and blog. I post a great deal on Facebook on my writing page (www.facebook.com/rachelrossanorambles) and reply to comments. This year, I am trying to utilize my other social networking accounts too. You are welcome to help me by following and commenting on them (www.instagram.com/anavrea and www.twitter.com/RachelRossano). I look forward to hearing from you.

The royal wedding approaches and the country is alive with anticipation.

Among the craftsmen traveling to the capital is Constance Rendare and her family. An artist, a widow of an unhappy marriage, and the mother of a young son, she dreams of escaping the cruel servitude of her father’s household.

Wilard Naron serves the Earl of Dentin. He returns to the capital, his childhood home, to collect his earnings and finally free himself from his father’s reputation.

Kidnappings, bandits, and a plot against the king complicate the journey. The conflicts throw Constance and Wilard together as their circumstances grow steadily worse. The more the pair uncovers, the direr the future looks for the country and for them.

A long, winding road climbed from the village and up the green and rocky face of the hill to the top. There, dominating the view and overlooking village, meadows, farms, and fields, loomed a massive vargar. Constructed of large gray stone blocks, the walls were rooted deep into the rock beneath them. Confident in their foundation, they rose high, stretching turreted fingers up into the darkening storm clouds.

As impressive as the view looked from where we were, I knew from experience the vargar only grew more intimidating upon closer inspection.

“The Earl of Dentin lives there?” Owen asked.

Owen considered this a moment. “How did he get to be the Earl of Dentin?”

The lad considered this for a while. “Was I born to a job?”

“Not necessarily. Although you can never be Earl of Dentin, you do have a variety of options. Thankfully, you have a mother who is most likely willing to help you find the best fit for you.” Something my father had refused to consider for me.

I laughed. I couldn’t help it. “What makes you think he wants to stop?”

“He can’t honorably refuse. Nor does he want to as far as I know.” Though the longer I considered it, the more I realized there must have been days Dentin would have preferred not to be an earl. “In my opinion, he is well suited to the job, and he does it well. I am sure he takes some satisfaction in that.”

“Is he a great earl similar to how you are an excellent horseman and trainer?”

“I am not a great rider and trainer.”

“You are good at it. I heard Hugh telling Roman so.” He paused, glancing back over the wagon bed to where his mother and Hugh were sitting on the gypsy wagon’s driving bench. “Don’t you like your job?”

“It isn’t really a matter of liking or not liking that is integral about a position.”

“It isn’t? Then what is important?”

“Every job comes with responsibilities and benefits. Doing the best you can in whatever task you are given brings a reward no matter whether you are an earl, a stable boy, or a farmer. Sometimes the rewards are hard to see, but they are there nonetheless. Seeking them out and appreciating them will bring joy.”

Owen regarded me severely through narrowed eyes. “So you find joy in working with horses?” 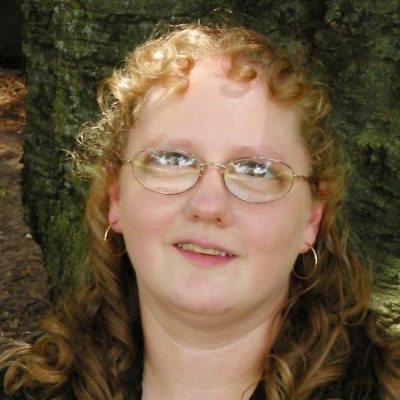 Rachel Rossano is a happily married mother of three children. She spends her days teaching, mothering, and keeping the chaos at bay. After the children are in bed, she immerses herself in the fantasy worlds of her books. Tales of romance, adventure, and virtue set in a medieval fantasy world are her preference, but she also writes speculative fantasy and a bit of science fiction.