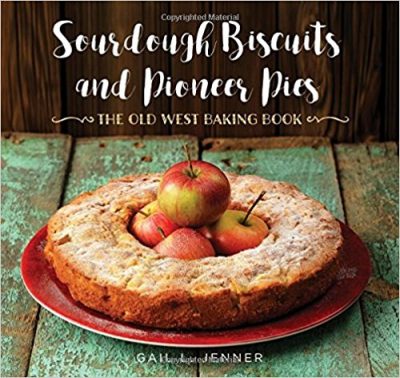 Sourdough Biscuits and Pioneer Pies, The Old West Baking Book, it’s full of Old West history and recipes as well as how the recipes were preserved and passed down. ~Amazon Review.

And what a thrill it is to share traditional Indian Frybread on page 12 and 13! Upon meeting my husband’s family in 1984, one of the first meals I ate included frybread. Grandma Susan Cohen always offered the flatbread at big family gatherings.

Warm bread on the kitchen table.

The smell of melted butter and pear jam.

The dining room filled with laughter.

While I did not learn to cook frybread from Grandma Susan, I did learn from a Colville tribal elder. So when Gail Jenner asked if I had a recipe passed down from the family, it had to be frybread!

What does Gail Jenner have to say about creating this cookbook?

First of all, the editor (with whom I have worked before) called and asked if I’d be interested in doing a cookbook that featured historic recipes. Loving history AND being an avid cook, I jumped. I was thrilled.

I have sold recipes to several women’s national magazines, even won a Better Homes & Gardens cooking contest. I cook for 4-6 men two or three days a week (sometimes daily), so am always cooking and collecting recipes. I also raise a large garden and do canning, etc., every year. I had always wanted to do a cookbook, so this was a real answer to prayer for me.

Tell me more about your ranching background, isn’t your ranch a few generations old?

Yes, Jenner Cattle Co., Inc., is my husband’s family’s ranch and he is fourth generation and our sons and nephew, now partners, are the fifth. Our grandchildren will make the 6th. It was established in the 1870s although another arm of the family began ranching in the 1860s.

We now have 1000 “mother cows” and are a “cow/calf operation.”  There are 6 partners in all: my father-in-law (at 93), my husband Doug, his brother John, our nephew Frank, and our two sons, Nick and Matthew. There are also 7 “Jenner” girls who have taken on another enterprise, Jenner Family Beef.

We buy cows from the guys (2-year-old heifers — 100% All Natural, ranch-born, ranch-raised, no hormones or antibiotics) and sell our beef to retail markets. Our beef has even been featured on “Diners, Drive-ins, and Dives” through Clove & Hoof, a butchery/eatery in Oakland, CA.  It has also been selected as the #4 hamburger in the Bay Area by the SF Chronicle.

What is your favorite recipe?

Oh, there are some great ones in this cookbook. Probably a couple of sourdough recipes (Sourdough rolls & bread), as well as the Spice Chiffon Cake — which was a family recipe from my husband’s great, great grandmother. And Dolley Madison’s Gingerbread Cake recipe is simple but very good. Ginny Laustalot’s Molasses Cookies are perfect and easy every time. Also, the Bride’s Cake is unique — makes a wonderful “tea cake” and is lighter and airier than many cakes. I actually think it’s pretty hard to choose a favorite.

I LOVE local and family history and am dedicated to trying to get people to preserve their family stories, photos, and traditions (including food). I sent out “calls” to CattleWomen, writers, friends, and family — and conducted interviews and “ran down” people I knew who cooked.

A few people did not respond, but in the end, I had more than 200 recipes (but could not use them all, which was unfortunate!!)…But the history of food really reflects so much about a people. I didn’t include my own family recipes because my father’s mother was a mail-order bride from So. Italy and she died when we were quite young and I didn’t have any baking recipes from my mother’s family (other kinds of recipes, yes, but not baking).

Sadly, very little of my father’s family’s history is known to us; perhaps that is why preserving traditions are so important to me. But as a rancher’s wife, living where four generations have lived and farmed, we have inherited so much through time.

When I moved onto the family ranch, it was almost like stepping back into history (even the upstairs of our old farmhouse had NOT been “remodeled” since 1898!). I was given my husband’s grandmother’s and great grandmother’s old recipes and that was a natural starting point.

I am thrilled with the book and would even consider doing another one!  It was fun interviewing people, finding recipes and old photos, and trying out the recipes — and my family loved it, too!!

Sourdough Biscuits and Pioneer Pies, The Old West Baking Book, it’s the absolute best part is the vintage photographs and the historical information on a variety of cooking basics and practices. ~Amazon Review

GAIL L. JENNER lives with her rancher husband on their family’s 150-year-old, original homestead near the town of Etna in Northern California. An avid cook and gardener, she has had recipes published in Better Homes & Gardens, Everyday with Rachel Ray, Country Woman, and A Taste of Home. Gail is an award-winning author of two historical novels, several western short stories and novellas, and seven nonfiction, regional, histories. Her most recent release, from Two Dot is SOURDOUGH BISCUITS AND PIONEER PIES, both a history of and collection of more than 120 historic recipes!