Taz is durable and confident

He soars down the hill, sure-footed,

The crowd cheers with delight

He powers through the rivers

His legs carry him with the speed of a gazelle

He gives onlookers an arm-tingling thrill

Taz is durable and confident.

Taz is a seven-time champion – King of the Hill – owned by Jim and Joan Phillips, trained by George Marchand, and jockeyed by George’s nephew Loren Marchand.

Loren had the honor to ride him all seven-winning times during the World Famous Suicide Race, WFSR, that takes place at the Omak Stampede every second weekend in August. “Taz was my brother, my best friend. He took care of me, kept me safe.”

The stocky gelding carried Marchand in 7 “King of the Hill” wins and 23 individual races, just shy of the record of 16 wins and 27 individual races held by Brownie, owned and jockeyed by Alex Dick from 1949 to 1965.

According to a Facebook post, owner Jim Phillips once told his brother he had a new horse that could move through water like a speedboat. But when Brian Phillips took his first gander at Taz, he asked, “Are you sure?”

Taz had a hard time finding his purpose in life. He didn’t make it as a barrel or roping horse as strong and fast as he was. At age eight, he finally found his place on the suicide hill. He spent nine years racing, retiring at age fifteen.

The striking palomino was retired in 2016 and was honored during the Omak Stampede. Emotion played on Marchand’s face as he rode him into the arena for the last time, the crowd cheering, tears in their eyes. I know, I was one of them.

Owners Jim and Joan Phillips and Loren knew it was time to retire Taz when a shoulder injury began to surface.

Excerpt from Girl Warrior, showing Taz’s anticipation prior to the race through Rooster.

I tap my boot with a crop, flinching at every bang of the trailer from Rooster’s hoof.

Time slows for a while until the racers are called into the arena. Jill and I hug and she heads to the stands. I ride with the others into the arena and circle around as the announcer makes introductions. My classmates are in their same spot, holding up Jill’s signs and sporting the white shirts. She waves. I circle in front of them, drawing courage from their affirmations. They make me feel like I could ride to the sun and back and not have one hair singed on my head.

We approach the starting area. I watch each rider and their horse, guarding my space. I stay clear of the ones I’ve come to know as troublemakers. We line up as our names and numbers are called out. Horses rear, lunge forward, smack into their neighbors. Rooster prances. I talk to him. Lay a hand on his neck. Assure him we’ll make it down. 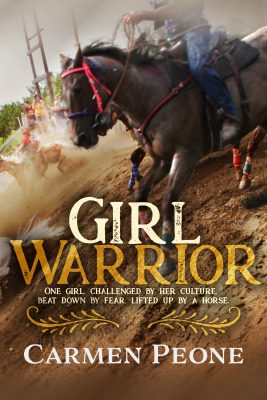