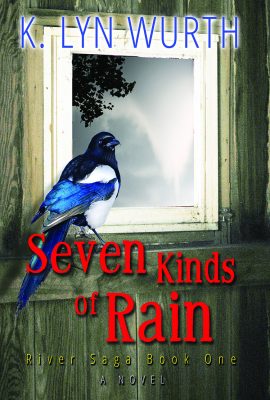 I was elated when Kelly Wurth asked me to review her book, combing for Native American authenticity. I’d met her during my first Women Writing the West conference three years ago in Kansas City, Missouri and knew she and I would become fast friends and fellow writing supporters. She is a class act and sweet and fresh as spring rain.

Where did the inspiration for Seven Kinds of Rain come from?

Seven Kinds of Rain: River Saga Book One, like my first novel, began with my orphaned, abandoned grandmother, Laura. Left in a Fremont, Nebraska orphanage when she was six or seven years old, her mystery fires my imagination. Margaret Rose was the first character to begin speaking in my mind when I began Seven Kinds of Rain, and she, like my grandmother is an abandoned child.

How did you come up with the title?

Jack Hollingwood, one of the three main child characters in the book, suffers a weather-related disaster and becomes fascinated with predicting the weather. Rain, in particular, mystifies him, especially the rain he identifies as the seventh kind. This is the phantom rain that forms, falls, but never hits the ground, what we now call “virga.” Scientists didn’t have a name for it during Jack’s time period, though, and he sees it as a metaphor, a contradiction and a mystery…something that both is, and is not, at one time.

Why did you choose Pawnee for the book?

As I researched the Republican River Valley of Nebraska, where my family settled during the 1940s, I learned the Pawnee Kitkehahki band were the First People of this region. To tell the story of that place without a significant Pawnee presence seemed to perpetuate a significant historical omission and misrepresentation. The Pawnee were forcibly removed from this region during the 1800s, but I featured them in my story to more fully represent the multilayered reality of the place. In my books and short stories, I like to explore a sort of spiritual archaeology of a place, the layers of existence and memory that dwell there. The Pawnee appear in my book through traditional Pawnee stories and respect for their ancestral presence and remains, through a primary child character named Kuruk, the Medicine Bear. What research did you do? What is your connection to Pawnee?  I traveled the length of the Republican River from Kansas, through Nebraska and into Colorado. On that trail, I visited the Pawnee Historical Site near Republic, Kansas, which depicts 1800s Kitkehahki Pawnee life. I attended a Great Plains symposium where I met some Pawnee tribal members, hearing their side of history, repatriation of their ancestral remains and revival of their culture in Nebraska. And of course, I use books and newspapers. Late 1800s and early 1900s anthropologists recorded and published many Pawnee folktales, some of which appear in my story.

Who is your favorite character in Seven Kinds of Rain and why?

This is like picking my favorite child…I can’t do that! But I have a special place in my heart for Kuruk because, despite our vast cultural differences, I’ve been a wanderer (and maybe even a spiritual runaway) most of my life, too. I’ve lived in nine different states and can’t call any one place home. The Republican River Valley, where my grandparents lived, was the stable center to which I always returned. So often being “the new girl” made me an outsider, an observer and a witness like Kuruk.

Tell us about the next book in this series.

Seven Kinds of Rain: River Saga Book One is about the early childhood and teenage years of three friends, Jack, Margaret Rose and Kuruk. Remember How It Rained: River Saga Book Two picks up their stories and relationships in 1934, when they are around thirty years old. Remember How It Rained also relates the three adult friends’ experiences of the 1935 Republican River flood, a remarkable regional disaster that took over a hundred lives.

Excerpt from Seven Kinds of Rain:

My legs dangle out the window. I must be some six feet off the ground but I let go of the windowsill. My feet hit the packed dirt with a whump that shoots pain up my shinbones. Over me hangs a full moon but shredded clouds filter the light, a good thing. I have enough light to see by and enough shadow to hide in, running away.

It’s a short dash to the apple grove. If the Genoa school wanted to keep me, they shoulda built a fence. Oklahoma didn’t hold me, and this one can’t neither, even by telling me they shoot bad little Indians who run away. I’m Kuruk the Medicine Bear, the name my Grandfather Burnt Wolf gave me, and bullets will pass through me. Burnt Wolf would know how to get me a vision but sickness in his chest took him last year, while I was in that Oklahoma prison they call a school. When I was home, he taught me the meanings of some things—my name, the Ghost Dance, medicine bundles and hand games. Stories, too. I hope he taught me enough to keep me a real Pawnee.

This time I’m not gonna run home. The Indian agent or maybe even Crooked Walk would send me back or to some other White-run school. After my mother died, he hardly talked to me but I don’t hate him, because his spirit broke before I was born. Burnt Wolf said so, that his son has breath going in and out but isn’t living because the Whites made him like a rock in the ground. They tried to make me one by giving me the name Peter. I’ll always be Kuruk Sky Seeing, the Medicine Bear.

They took my bear claw, the one on a leather thong that Grandfather gave me but I stole it back from where they hid it in a teacher’s desk. It thumps up and down on my chest now, keeping time with my feet while I run.

A breeze tickles my bald head where they shaved it so I scratch my healing louse bites. I never had lice before this school and now I got no hair. A few drops of rain tap my scalp and make me shiver. Remembering Burnt Wolf’s voice, I sing,

The wise man taught me songs,

Five songs for making it rain.

The first calls down cloud or mist,

The third inspires a shower and

The fourth a lightning storm.

But the fifth, when the wise man sings it, clears the sky.

The fifth one clears the sky.

The words are in Burnt Wolf’s voice, from a Ghost Dance ceremony but the tune is mine, coming out of me like that moonlight through the smudgy clouds. Careful to leave no tracks, I jump over bare ground and only set my feet on brown grass or weeds. After an hour or so, the pattering rain slows and stops and the clouds thin to let moonlight spill down the sky, across the broken-stalk cornfields and dry-weed pastures. It lights a road ahead where there was none before but I still stumble, weak from my heart racing and feet flying over the ground. I didn’t sleep last night. This day was a long one, too, climbing trees to harvest apples and carrying bushels to the storehouse. Juice from the apples clings to my fingers, sticky and sweet.

I’m walking half-asleep but I tell my feet to keep going. I stop when the moon and stars mirror off the Loup River. It’s more beautiful against the dark land than the school girls’ ribbons around their shining black hair and on its bank there’s the log I need to hide me from travelers on the road.

Behind that log in the honey-smelling grass, watching the moon fall, I remember Grandfather telling me about the Sioux attacking his own Pawnee grandfather, killing him in a raid on the Loup Fork of the Platte. Is my great-great grandfather, dead by a Sioux arrow, watching me now? I’m not sure the dead can see anybody from where they are. It might only trouble them, if they can.

Then I remember a story my grandfather heard from White-Sun about Coyote and the Rolling Skull. Because it’s dark, I try not to think about the skull on the ground and how when Coyote made it angry, it chased him. Because I’m hungry, though, Coyote’s song sings in me,

What a fine place this is;

I wish I could run the buffalo around;

The song makes me hungrier so I count stars. 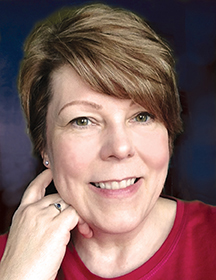 K. Lyn (Kelly) Wurth writes short fiction and novels about Great Plains and Western experience, history, health and family life. Her novels, The Darkwater Liar’s Account and Seven Kinds of Rain: River Saga Book One, unfold in her family’s home state of Nebraska. Remember How It Rained: River Saga Book Two and an anthology of her short fiction, Look West from Here, are scheduled to be released in 2017. Her short stories have been published in Women Writing the West’s LAURA Journal, The Broadkill Review, The Examined Life Journal, St. Anthony Messenger and a Purdue University Press anthology, The Arduous Touch: Women’s Voices in Healthcare. Still inspired by a lifetime of Great Plains and Rocky Mountain experience, Kelly now writes in rural Iowa, where she lives with her husband, David.