I’d like to welcome Hornet student-athlete and Colville Tribal member, Meika Heath! Have you ever thought about the term, shoot like a girl? If we can learn to shoot hoops like Miss Heath, I’m in!

Recently she earned a 1,000 point career award in basketball.

Is that a big deal?

You bet it is!

Especially for a junior in high school.

Meika plays for a B-8 school on the Colville Reservation and began her high school varsity career as an 8th-grader. At 5’10” she has made 119 points total with 25 assists and 26 steals as of January 16. With six games to go, I’m sure these stats will continue to soar.

I asked Meika when she first started playing. She recalls around age six with a group called “Little Dribblers” out of Spokane, WA.

Even though she plays volleyball and softball as well, basketball is her favored sport. “I love the rush you get when you make a good play and the person who scores is happy and you hear the crowd cheering for them!”

Don’t you hear “team player” in that statement?

This young athlete loves being able to see if someone can challenge her.

Sounds a bit competitive, wouldn’t you say? But I think that’s what it takes to earn those 1,000 points this gal’s racked up. She’s got talent and a heart of gold and rallies her teammates before, during, and after each game. Her light shines both on and off the court.

There are many supporters in Meika’s life, but only one who has influenced her the most when it comes to basketball and that is her older sister, Chantel. Chantel had a successful high school and college basketball career, also beginning at a young age and going on to play for the Central Washington University Wildcats.

Meika stated, “If she (Chantel) could do it, so could I.” She’d spent many hours in the bleachers cheering on her sister as she climbed the basketball ladder. 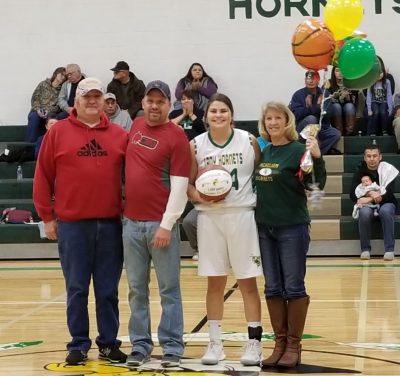 Now Meika’s climbing rungs on her own ladder and at a rather quick pace.

With one and a half high school years to go, Meika plans to attend college and work toward a forestry degree. She’s always been attracted to the outdoors and would like to come back and work for the tribe.

“Hitting my 1,000 points was such an exciting feeling all I could do was smile!”

As was the case with her gym full of fans.

“Me and Rylee (her teammate and good friend) ended up hugging for what felt like 10 minutes.”

“It’s not an award, it’s really just a personal career accomplishment for a basketball player to reach 1,000 points.”