Book signing used to terrify me.

After six years of shaking hands, having my picture taken with young readers, reciting my hook until my voice came out hoarse, speaking at libraries, schools and conferences, and week-long events, I have finally concluded three things:

Sometimes the booth fee is a might bit steep, but when you have a venue that fits your genre like a good pair of boots and learn how to have fun doing it, well, that lasso floats over that calf’s head as smooth as the silk neckerchief wrapped around a cowboy’s neck. Books sell, readers come back for more, photos speak to place and time, props and prose that relate to your genre add flair and pizzaz, wrangling readers into the story as it carries them deeper, longer.

Indeed, larger venues do require more items to fill tabletops: a wagon full of books, bookmarks, posters, banners, pens, cups, and other giveaways, anything that compliments the genre––all fitted with a logo that points to the author and his tales, allowing the booth space to draw folks in.

My genre is Young Adult fiction with Native American characters set in Indian Country. I also love photography so I have pictures of setting, horses, wildlife. I also bead, so I have authentic Native jewelry in my booth. A local gentleman artist read my first two books and created my character doll. Readers love to have their picture taken with me and Spupaleena. The more creative the author can be, the better attraction she’ll have.

As authors, we can’t just sit back and hope someone buys our books. Rather, we have to flow like the ink on our pages, drawing in folks by chatting with them, making new vendor friends who also become fans, and gleaning new readers. For introverts like myself, it may take a few events to warm up, but once your voice is found, this all becomes natural. Just keep your eye on the calf…

My favorite venue is makin’ camp during the Pendleton Round-Up in Oregon at the Dave’s Chevron parking lot with fellow author and poet A.K. Moss from John Day, Oregon. This year we were able meet and greet, sell our books, and find existing readers coming back for more and while meeting new ones too.  We also came home with the NFMWR Championship. A highly coveted award. Never in our wildest western dreams, did we think we could accomplish such a feat.

It all began Wednesday night, A.K.’s birthday. The party hadn’t started yet. Or so we thought. I sat down in The Line Shack, A.K.’s motorhome and mobile recording studio, grabbing some grub after a long day in the booth when I swear a six-foot monster poked his head out from under my bedroll, baring pointed fangs. I quickly strapped on my spurs and shoved my Stetson on my head, flashlight shining in deep, dark corners.

We reached for our side-irons, but they weren’t there. Dang…we’d left them in my pick-up. I reached for my cowpony. Dang…left him at home. Too late for the five-hour drive. Lesson learned. We reached for our ropes hanging off the cabinet doorknobs and twirled our lassos. We threw the first loops and dallied up, but missed. That little critter ducked and made tracks under the couch. He was nothing but a blur. I cringed knowing there was no way I was going to slip into my bedroll with a tiny tail on the loose––I mean six-foot monster!

We rallied, opening doors and reaching for a broom. Dang. No broom. I added that to A.K. list of needed supplies. I found the handle of something and slid it into my empty holster, jumpin’ on the toilet seat with electric toothbrush and toilet paper in hand. Not sure what I was going to do with it, but it was the only arsenal I could find. We tracked that varmint for nearly an hour, finding a bachelor pad in the storage compartment of the Line Shack and Cheetos under the seats. I felt the old boy grumble as we searched his every nook and cranny. I understood his itch to get the critter out. No luck. Looking up, I saw the horseshoe dangling upside down.

I reached for my Dodge keys, making a late-night rendezvous to Wal-Mart with A.K. for traps and bait. After setting out traps in front of the entrance of those dark spaces, we hunkered down for the night and waited…

It wasn’t long until my arms were fighting and flailing with Ol’ Johnny’s claws clamped into the flesh on my back. I swung around, hollering in pain. He hung on like a banshee and when the whistle blew, eight seconds or more passing, he jumped off and scampered away, tossing his hat in the air and waving his tail in victory. That’s when I felt a pillow slap me in the face and heard A.K. shouting for me to wake up. 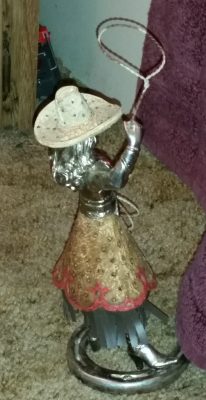 For a small moment, I thought maybe he still lurked in the corners, but knew with four more days in the booth, I needed some shut-eye. And so did A.K.

The next morning, she told the account of hearing the snap of a trap around 2:00 a.m. It was done. Victory was ours. She could finally sink deep in her bedroll and dream of that big old trophy sitting in the Line Shack.

With only a few cuts and bruises, we made it out alive, trophies replacing our side-irons. 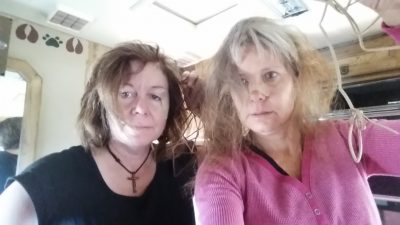 Some battles are hard fought, but with sturdy ropes and a bit of grit, we got the job done. We had to because the next morning when I went to fetch the critter, it jerked. The trap had stuck his nose and he was fightin’ made, struggling like a Brahma bull with a cowboy spurring ’im outta the chute. We grabbed our ropes, A.K. at the head and me at the heels. We twirled and threw the rope with all our might, capturing the six-foot beast. We pulled and dragged and pulled until we had him out of the Line Shack and in the sagebrush. I swear I heard the Shack sigh with relief.

We wrangled that mouse, making sure he wouldn’t bother us again and retrieved the trap in case he had relatives in the area.

Thinkin’ back, I wonder if all Ol’ Johnny wanted was a bite of cake and to simply say, “Howdy host and Happy Birthday, my friend. Enjoy the ride.”