Here it is!! The Change of Heart cover… 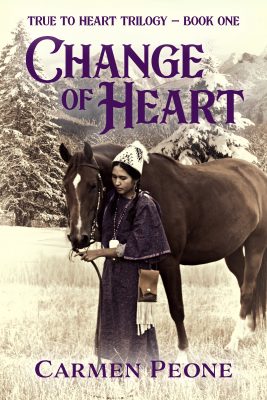 And for the cover, all I needed was one traditional Plateau Indian basket hat. How hard can that be right?

A couple of months ago, I went in search of the right cover for Change of Heart. After getting my rights back from my former publisher, I was eager to create the stunning cover I’d dreamed of.

Then I could not find the “Just right” photo without months of emails and phone calls asking for permission. One such email I have had no reply to this day!

Then a daughter-by-love hooked me up with a young gal from the Nselxcin (Okanogan) Language House in Inchelium, WA, on the Colville Reservation, where I live and write. How hard could this be, I asked?

I met with the potential model and her sister. She was perfect for the cover model. All I needed was a basket hat and these two ladies had the connection, Brandon Finley. (You can read more about the cover model in a future post.)

I’d known Brandon since birth and before he’d worked at the language house prior to moving near the Kalispell Reservation in Usk, WA. It took him two weeks to create the hat just for the photo shoot, delivering it a couple hours prior.

As the only person in town, or that I know of, weaving traditional Plateau basket hats, he was more than willing to provide one. What a bonus.

But here’s the real blessing. He made the hat just for the photo shoot and it now resides on top of the glass case that houses my Spupaleena doll which is perched in my office.

About the Palouse Basket Hat

The earlier materials used to weave basket hats were Indian hemp or dogbane. Once the settlers arrived, Native Americans switched to corn husks as they were easier to acquire. Today, modern materials such as hemp rope and alpaca wool are used. Some women bead their entire hat.

It is said Inchelium used to have a huge hemp patch behind the Inchelium Community Church, which according to Brandon no longer exists.

It was called the sn̓kłspitc̓n̓tn. Or “The place of dogbane.”

The basket hat is a traditional woman’s hat and is given as a gift. On the hat my cover model, Shayna Palmanteer, wears is the “flying geese” pattern. A common Plateau design that represents strength.

Every year, geese make a long venture over treacherous mountain passes and are known for their strength because of the journey they take. When a woman wears the hat, it is said the strength of the geese transfer to her.

Even the dark lines have a purpose. A black line circles the top and bottom of the hat indicating life and death. The woman’s strength lies between the two––her lifespan.

In the old day, the hats were light brown or tannish and the design was dark brown. In contemporary times, the hats hold various hues.

The strength of the hat and the geese matches Spupaleena’s drive to break through culture bounds and have the heart, courage, and passion to follow her dreams. The journey she believes her Creator sent her on.

I hope we can all share her desire and drive in our own lives.

Excerpt for Change of Heart

“First, I have a gift for you.” He pulled a two-toned
brown woven basket hat made from dogbane from his
pack. On it was the traditional pattern of the area––geese
flying over mountains. A hat gifted to a woman, giving
the strength of the flight to the one who wore it. “I am
thankful you are alive…That Koolenchooten has brought
you back to me.” He handed her the hat. “This was your
grandmothers. It is now yours. Wear it with honor.”

Spupaleena nodded and placed it on the crown of
her head. The strength of the waterfowl now shifted to
her. Why was her father giving it to her and not her
grandmother?

Brandon was raised on the Colville reservation and began beading at age 11. He makes his own drums, buckskin, beadwork, and basket hats. He learned and taught Nselxcin at the Inchelium Language House from 2014 to 2017.

His devotion lies in keeping tradition and language alive. He sells his work mainly on the Powwow trail in Northeast Washington and enjoys gathering traditional foods and medicines.