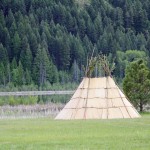 And here they are:
1. What is your working title of your book?
I have two of three part Young Adult trilogy out now, Change of Heart and Heart of Courage. I have a third coming out this spring. I’m not sure about the title yet, but it’s sure enough to have “Heart” in it somewhere. They are Native American Historical and I wrote my series for my sons who are Colville Confederated Tribal members and of the Arrow Lakes band, which are the main characters in my books.
2. Where did the idea come from for the book?
I had worked with a tribal elder, Marguerite Ensminger, for three years learning the Native language and culture. After living on the reservation located in Northeast Washington with my family, I decided to write the series as a part of my son’s hereitage.
3. What genre does your book fall under?
It’s a Young Adult Historical fiction.
4. Which actors would you choose to play your characters in a movie rendition?
I would actually love to see two of the young Native people, Loren Marchand and Ashley Zacherle, play the parts. These two individuals grew up with my sons and I interviewed them both for two of the books. They would play the roles of Spupaleena and Hahoolawho. The characters raise and race horses in the mountains and the setting takes place in the area we all live in. It would only be fitting for these young people to play the character’s roles.
5. What is the one-sentence synopsis of your book?
Spupaleena, a teenage Arrow Lakes girl, has a dream to raise and race the finest horses in Indian country, but the boy’s are against her racing and will do whatever it takes to keep her from reaching her goals and dreams.
6. Will your book be self-published or represented by an agency?
This series is published by Tate Publishing and Enterprise, a subsidy ran publisher.
7. How long did it take you to write the first draft of your manuscript?
It took me about five months.
8. What other books would you compare this story to within your genre?
There are not many books real similar to these. I have included some of the language and traditional Native names and it is Christian based. It is full of adventure, failure, hope, and forgiveness.
9. Who or what inspired you to write this book?
As I stated previously, my four sons and elder Marguerite Ensminger inspired me the most to write this series. It was my youngest son, Marshall, who pestered me to have it finished and published.
Considering I raised my boys and live on an Indian reservation, my books are authentic and include bits of the Native Language. Change of Heart introduces the main character, Spupaleena, to her love of horses and Heart of Courage is fast paced and keeps the interest of youth.
And now, here are the links to four other excellent writers who during the week of December 3 will be telling you about their own Next Big Thing. Check them out. There is some great reading in store for you.
Brae Wyckoff http://orboftruth.blogspot.com/
Victoria Dougherty http://victoriadougherty.wordpress.com/2012/11/27/baby-its-cold-outside/