Have you ever had opposing emotions? Or should I ask, how many opposing emotions do you have in any given day? I’m struggling with such an intense opposition my heart tugs and twist and yearns for a peace I just can’t seem to muster.

Last year I started my 2-year-old gelding under saddle. I’ve studied Natural Horsemanship for almost 2 decades and wanted to train my own horse from birth on, tired of fighting the half-broke horses that we collect. Unfortunately I lost two colts along the way. But then one day, two years ago, a live foal announced himself one early May morning. In the coral stood a shiny, copper-colored wobbly-legged foal with curious black eyes. A star on his forehead and a snip on his nose.

I named him Echo’s Rustic Glow Cash as Echo, Glow and Dash for Cash lingering in his lineage. But I call him Cash and I can ascertain that he’s worth much more than money.

Although my goal was to raise Paint horses (I even named our place Painted Hill Ranch), I settled on half Morgan and half Quarter horse; the Quarter Horse mare was ours and the Morgan sire was a friends. Disappointment of not having a Paint foal creeps in, yes, but he’s alive. And he’s everything I’ve dreamed of in a horse. But the color. Still, Cash is gorgeous and I love him. And in reality, he is red and white (Paint horse owners will understand that little joke).

From the day he dropped, I’ve had my hands on him: grooming, leading, teaching, loving. Lessons, desensitizing, sensitizing, my heart, all of it as tender and soft as a butterfly’s wings.

Six month old and he’s longing, leading, going over obstacles, and backing up hills (little ones). He’s also jumping all the fences to get back with him mama once weaned. I put him in with the pony and he thinks his little buddy is a play toy. Pony tells him NO! I put him in with my Paint gelding and they become friends. Cash settles in. I almost wish we had another little one for him to play with.

Then he turns one and he’s moving freely up and down hills, both forward and backward. He trots over the teeter-totter, his eyes bright, begging me to teach. We go in and out of brush. I pony him and he comes freely, biting my saddle, my Paint horse’s rump, my boots. You get the picture; an attention span the size of a gnat. I can move his hindquarters and his front end in nice, smooth circles. I put a saddle on his back, he looks at me as if to say, “Is that all you got?” I put him in with my husband’s mare and he learns manners.

He turns two. I pony him again. I do additional work with his feet and legs, we go out and I drive him with the saddle on, bit him up, and put my weight over his back. Everything Buck Brannaman, Stacy Westfall, Ray Hunt, Craig Camron, Clinton Anderson, and Steve Rother have told me to do, I do. Obstacles are a breeze: ball, bridge, curtain, water, tarps, and more.

He learning quickly, almost too fast I tell myself. Slow down. Then one day I’m in the arena, warming him up, circling him and asking for a soft feel. He veers to the left and leans into a wire panel fence (which is now solid horse panels) and it bends down into the back pasture. We go with it. My arm breaks as it slams to the dirt and the colt rolls over me. 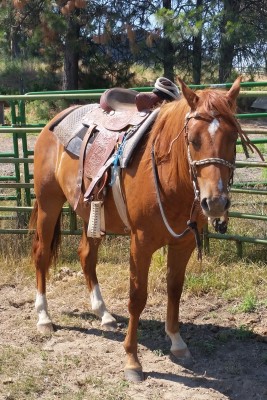 All the work we’ve done over two years with ten solid days under saddle and some freak accident happens at a slow walk as we tumble over on our backs, ending up on the other side of the arena. All that work and I was being careful, knowing I couldn’t afford to get hurt. I had a book to write, signings to attend. Now everything is postponed. My heart tugs and twists with conflicting emotions: thankful, anger, gratitude, sad, shame, Fear.

Seven month later, by break is healed and strong, but my wrist and hand still hurt and there is still swilling. I haven’t been able to wear my wedding ring. The specialist tells me I’d be fool to do much with him until the end of July as my type of injury takes a full year to heal. I drag myself out of his office and even though my husband and I have talked about someone else finishing him, the reality floods me. Emotions tug at me like the kindergartners I work with at school.

And now I have to make a decision. Do I postpone his training until the end of July, an entire year? Make such a smart colt wait? Will my wrist ever heal enough to get him at the competition level I want him at? Can I swallow my pride and make the phone call to the trainer of my choice?

Yes. I can and I do. I make the call to Steve Rother and Cash is in. He’ll get the training he needs and come out on top: spinning, learning a nice, smooth canter, and all the manners and patience young horses gain with proper training.

Perhaps patience is what I need. And to trust God and myself that this is the right decision for things really do happen for a reason. Timing is everything and as Ray Hunt says, make the best out of a bad situation.

So the 6th of May, I’ll load Cash and hall him across the Columbia River to one of the best horse trainers I have worked with. In reality, even though disappointment still settles in a thick fog at times, this is a win-win as Cash will get the training he deserves and I get the horse trainer I desire. By the time I can get on his back, he will be ready and we can continue down the path we began with the partnership that was underway.

A horse gallops with his lungs,
Perseveres with his heart,
And wins with his character.
– Tesio