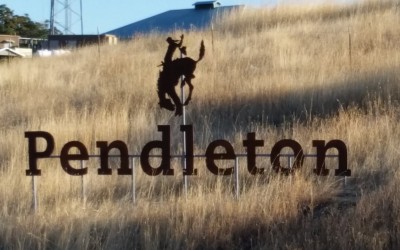 Have you attended the Pendleton Round-Up before in Pendleton, OR? This past week, my friend and western woman poet and author Kathy Moss, A.K. Moss, and I participated as vendors. What a ride!

I attended the 100th anniversary round-up with my husband and father in 2010, and the Round-Up sure did put on an exciting show. Besides slack and the weekend rodeo, Indians riding horses in a replay event blazed past the crowd, Happy Canyon show and Indian Princess Pageant entertained and honored the People, vendors of both cowboy and western lifestyle and Native American culture filled streets as did food and music. In fact, Pendleton shuts its doors for the weekend because it is one enormous celebration of the western life and culture. And now, five year later, I represented my family as a published author sharing a piece of tribal culture, language and legends woven into the soul of my Heart Trilogy. 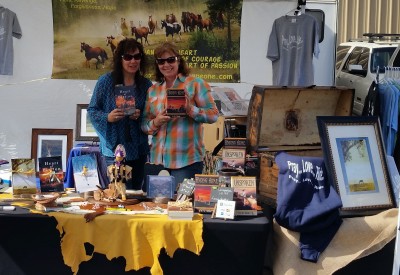 When Kathy and I agreed to snag a booth at Dave’s Chevron, the last available booth we were told, I was thrilled. We both were. We pulled out our checkbooks and wrote a hefty note, but we pulled our boots on, tipped our hats and made the move. We paid for the booth space and Pendleton business license. Visions of an empty bank account rambled in my overloaded brain as I thought about the cost of a hotel and opted to bring my living quarter’s horse trailer to stay in. I dialed the City of Pendleton and found an empty parking lot just outside of town we could camp in. Also the last available space, or so I was told. The lot ended up not quite full, which was nice and quiet. All but the train and highway traffic. It was a relief to save a dollar or two.

At the last minute, I talked to my husband into allowing me to pull his larger camp trailer the seven hours and he agreed. What a gift as we had the room to sprawl out to rest and regroup after the end of an eleven hour day.

Speaking of long days on hard pavement, here is a peek at how our week went:

Day one: Arrive in Pendleton, drop off camper trailer, meet our awesome camping neighbors and check in at Dave’s Chevron. I set up my tent and unloaded tables, books and other vending items. I looked about and saw that we were surrounded by Justin, Stetson and Roper booths. Huge Justin, Stetson and Roper booths. I began to sweat as a feeling of panic crept swirled around my nerves. “I’m here to sell not shop” became my mantra. “We got this.” A Facebook friend reminded me we’d get their leftovers. We were here to meet people and make new friends. To share our stories with those who love all things horse. 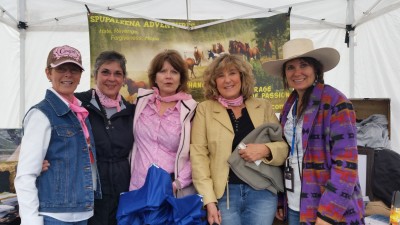 Our booth looked like the size of an ant next to dinosaurs and hunkered near their gas pumps and behind that huge blow up Justin boot, no less. You don’t know how many times I wish I had a horseshoe nail in my pocket. We shopped for food and other booth necessities like small, decorative hay bales and a stuffed pony.

Day two: Arrive at booth, arrange books, hay bales, pony and such. Kathy brought a beautiful antique trunk we utilized for effect. My character doll, Spupaleena, stood tall and confident as she greeted the crowd. That ginormous Justin Boot hid our booth from far away, but those coming to shop for clothing, cowboy hats and boots wandered over to a couple of authors who reeled them in with enthusiastic smiles, dazzling photos and brilliant book covers. I felt inside my pocket for a horseshoe nail. I say this was a very successful day as we both traded books for new hats in additions to selling a nice amount of inventory. 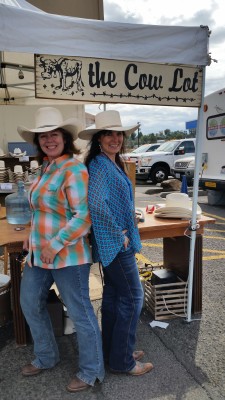 Day Three: Rain. Rain. Rain. We scrambled to reorganize our booth so our books would stay dry. In the afternoon, clouds parted, blue sky appeared and rain went to soak other parched land. The air warmed up a bit, but a gust of wind blasted us and two of my frames crashed to the pavement and glass shattered. Good thing they were not photo’s for sale, but merely advertisements of my books. We made it through with hot coffee and cocoa. Kathy recited poetry to those who were brave enough to weather the storm. She actually shared her poetry with anyone who wanted to listen, and what a treat that was! I never tired of hearing it because she put her heart into each spoken word. 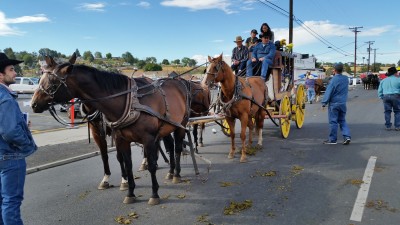 Day Five: Saturday. We expected this day to be the best day of them all, filled with rodeo fans looking for souvenirs and a good read. But it was the slowest day of them all. Yet we managed to visit with lookers, sold more inventory and by the end of the week noticed we made what we put into the event and much more. Our hearts were happy, especially after hearing this year was slow.

During the week, we met up with friends and family. One friend and sister author, Shanna Hatfield, came by as she was signing her Pendleton Romance series at Hamley’s Saddle Shop. 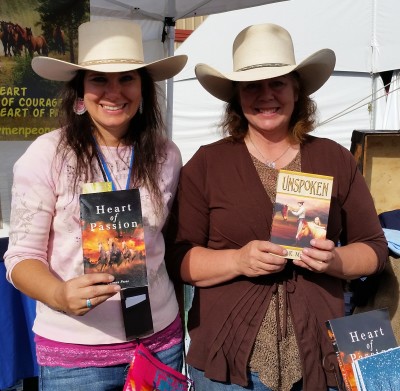 I’d say this was a successful week in Oregon. We laughed, wrote poetry, Kathy shared hers while I rehearsed a Salish greeting for an up and coming workshop I will present at the Women Writing the West conference in Redmond, OR next week.

Our week thrived and we’ve decided to return next year. So if you’re in Pendleton, Oregon in September, please look us up and come on by our booth. We’ll treat you to books on western and Native American culture, cowboy poetry, and Native American arts.

And remember, an author always appreciates a book review on Amazon.com and Barnsandnoble.com.

~ “Few cowboys ever owned much. The primary reward of being a cowboy was the pleasure of living a cowboy’s life.”   RanchAndFarmWorld.com