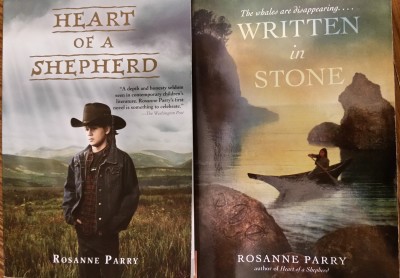 met Rosanne Parry at our Women Writing the West Conference in Golden, CO last October.  She won the WILLA award for best young adult fiction book with Written in Stone.

Written is Stone touches my heart as it includes Native American culture. Rosanne taught fifth grade at the Taholah elementary school. Consequently I have nieces and nephews with Quinault blood running through their veins and who have family living on the Quinaullt Indian Reservation. What a small world indeed. And what a thrill for me to be able to contact her and chat.

Rosanne writes about a young Makah Native named Pearl in Written is Stone. Her father was a notorious harpooner in the early 1900s and she longed to follow in his footsteps. Unfortunately the whales began to wane and the Makah have to find an alternative way of life. On top of that, Pearl’s father is lost on a whale hunt, leaving Pearl and the family feeling panic-stricken.

Pearl goes out on her own to search for a way to preserve her family’s culture and honor their nation while keeping a wildcatter from stripping their way of life. There is no oil in their area, but he’s determined to locate some.

When reading Written in Stone, Native culture shines through the cloudy Pacific coast as Rosanne shines bits of the Makah way of life into her story, from her mother’s button blanket, herbs used, raven legends, to the making of a traditional Makah Canoe. Teaching in Taholah has blessed the author with values and principles that will stay with her for a lifetime.

Heart of a Shepherd is another book written by Rosanne Parry that I’ve recently read. This is Rosanne’s first published book by Random House Yearling.  It is a coming-of-age story about one boy’s determination to keep the family ranch in tact while his father is shipped off to fight in the Iraq war. Brother, with the help of his grandparents, struggle to keep the ranch going. Ranching is not Brother’s dream, not like his fathers, but he’s willing to do whatever he has to in order to keep the ranch running.  Between birthing cows and helping at the Memorial Day Veteran’s dinner, Brother’s layers of angst about ranch life peels away layer by layer.

Both books are worth the read for youth and adult alike. I look forward to reading more of Parry’s books.

People on the outside think there’s something magical about writing, that you go up in the attic at midnight and cast the bones and come down in the morning with a story, but it isn’t like that. You sit in back of the typewriter and you work, and that’s all there is to it.
– Harlan Ellison