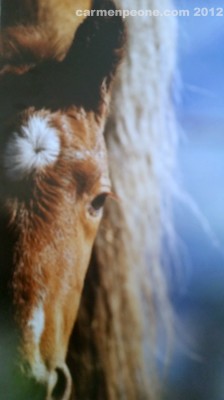 I truly believe in God’s timing. Seventeen years ago, my dream was to raise Paint horses. Flashy, colorful eye catchers. Funny how I started with two geldings.

I eventually purchased a mare for my son and bred her to my geldings’ sire. Unfortunately we lost mare and foal during the birthing process.  I won’t go into details as it is a rare and gruesome occurrence.  My cousin heard about our loss and gave us a pregnant mare which happened to be a beautiful palomino. Not a paint, of course, but a beautiful small quarter horse.

She came with an ultrasound photo showing the little blob of life. Come spring, I had to wonder if she had absorbed because her belly was staying the same size; I saw no growth. So after the due date, it was plain as day there was no foal coming into our family.

I was so heartbroken I vowed to never breed again and lost hope of a foal, Paint or otherwise.  It just wasn’t in the cards. And then the itch came back. It was becoming so strong, like an itch in the middle of ones back that just can’t be reached no matter how hard one tries.

A friend of mine had a stunning Morgan Stallion. Golden Body. Black mane and tail. And I knew his mind was solid. He had a reputation of throwing gentle, athletic foals. I tried and tried to scratch that itch, but it was so deep and intense. Could I go through another loss? Was my playing hand full?

I finally decided to take a long stick and relieve that itch. I picked up the phone and called my friend. I trailed our mare, Faith, the five minutes to her house in June hoping for a May foal. Hoping for a filly we could call Hope.

Come spring, I watched her belly swell with a mixture of fear and excitement.  It had been a long time since we had a foal. The day I saw a hoof sweep the side of her belly, I knew this baby would be all right. I really didn’t care if it was a filly or colt, I just wanted a live foal.

Faith’s due date was approaching and we were scheduled to go to Fairbanks, AK for our granddaughter’s high school graduation. I did not want to miss the delivery, but knew my human girl would have to come before my equine girl.  Prayers flooded the heavens as I begged the Lord for his favor; I needed to attend both celebrations. I had a good friend ready to stay at the house just in case the foal had not arrived when we were ready to fly north.

May 4th came. Faith’s bag was full. She was not yet waxing so I went to bed. I fell asleep praying the foal would come soon. I healthy live little one. My husband, Joe, woke up the following morning and went to feed the hounds down by the corral. He came running up, out of breath and shouting, “Grab your camera and get down here!”

I hadn’t moved that fast in a long time. I did as I was told, tears streaking down my face. I stopped at the gate and stared at a little copper-colored beauty standing next to his glowing, golden, yet exhausted mama–– a stud colt looked back at me with curious eyes. I knew he was pretty fresh as he was still wobbly.

I opened the gate and walked over. More tears pooled and spilled as my fingers ran down his fluffy back. I thanked God over and over for this precious gift. Finally, a foal I could raise from the ground up. And what a ride it has been.

His name is not Hope, but Cash has given me fistfuls of hope and love with his stunning presence.

Next week I will share what I have done with him as a newborn and a weanling.