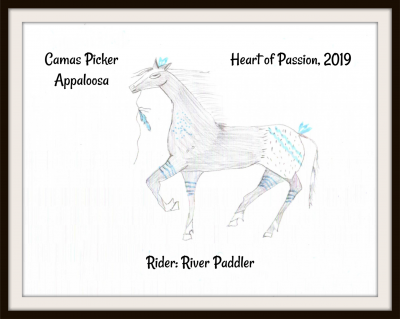 Who doesn’t love a stout Appaloosa!

Camas Picker holds this week’s spotlight, and I’m thrilled to introduce him and his owner/rider.

But is he fast enough to beat his female competitor?

The Appaloosa is an American horse breed best known for its colorful spotted coat pattern and is now one of the most popular breeds.

The Nez Perce people residing in the Pacific Northwest refined the original American breed. Settlers once referred to these spotted horses as the “Palouse horse”, possibly after the Palouse River, which ran through the heart of Nez Perce country. Gradually, the name evolved into “Appaloosa.”

The Nez Perce lost most of their horses after the Nez Perce War in 1877, and the breed fell into decline for several decades. The Nez Perce had well-established breeding troops as early as the mid-1700s and were able to develop their stock in what it is today.

A cackle came from the right side of her. A tall, thin but muscular boy about her age sat next to her on his spotted horse. They seemed to tower over her and Bear. Tight braids spilled down his buckskin shirt, and he wore a one-inch, circular abalone earring in both ears. Two light blue, squiggly, parallel lines ran from the right corner of his forehead to the left side of his jaw––the symbol of a creek or slender river.

Like his rider, the spotted horse had the same two squiggly blue lines on his rump. She thought Pekam had said his name was Camas Picker. The boy stared at her, causing her to shiver. She narrowed her eyes. And kept singing in a hushed tone.

To the east of Spupaleena’s village (near present-day Colville Tribe in Eastern Washington along the Columbia River) is the Kalispel Tribe of Indians which is where Camas Picker’s rider, River Paddler, comes from.

The aboriginal homeland of the Kalispel, the Camas People, was in the camas-rich area around Calispell Lake and the Pend Oreille River in what is now eastern Washington. Fur traders referred to them as the river paddlers. Their homeland, like Spupaleena’s, was heavily forested with mountains interspersed with meadows. Their lifestyle before the coming of the horse was centered on fishing. Their traditional territory followed the rivers into what is now northern Idaho and western Montana.

Prior to the coming of the horse, the people would spend the winter in camps along the Pend Oreille River. In the spring, families separated to fish and hunt. In June when purple camas flowers ripened, families came back together at their fields to dig the flower’s bulbs. Following the camas harvest in July, the Kalispels would once again focus their attention on hunting, fishing, and gathering various edible and medicinal plants, berries, and seeds. When the snows began, the bands would reassemble at their winter camps along the river where snowfall was lighter and the temperatures somewhat milder.

As a river people, water transport was important. The Kalispel made and used several kinds of canoes, including both dugouts (made from a single hollowed-out log) and bark canoes (a frame covered with bark, mostly either birch or cedar).

Today’s race had been moved to the land east of the Kettle Falls, and two teams from neighboring villages joined them. Word had it these teams had come to win. They looked strong, all young men. Spupaleena swallowed the lump in her throat. Why had no girls joined or lead any of the teams?

Blocking her view of the new teams, Five Horses circled Grizzly Stomper, trying to settle the stallion. The rest of his team followed, not one of them a girl. She grunted. Were they not brave enough to trust one?

Their horses did look taller. Stronger. She swallowed hard, her palms damp. Did her team have a fighting chance? She lifted her chin. Of course we do!

Wolf rambled past, his leggy bay’s eyes wild looking. “You will not win today.” He held his head as proud as his horse’s, rattling off reasons why he would win and addressing her with vulgar names.

Cloud Maker was a fine animal. Was he foolish enough to make the same deal as Rattlesnake?

When the path cleared and the new teams came back into sight, Spupaleena froze. She had heard of this racer and his team who came from the southeastern territory, near the falls where the Spukanee lived. Spupaleena had heard about them as they lived in similar ways to her people. English trappers called them: The Children of the Sun or Sun People. The other team came from the east, along the river they called: Hung From Ears. French trappers referred to them as the river paddlers, but they called themselves, Kalispeliwho––the Camas People. 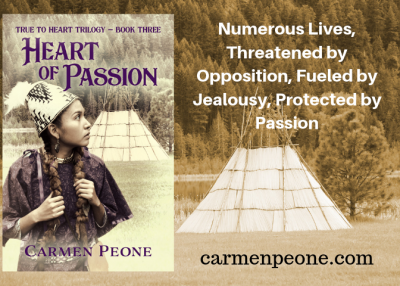 Heart of Passion, Coming October of 2019