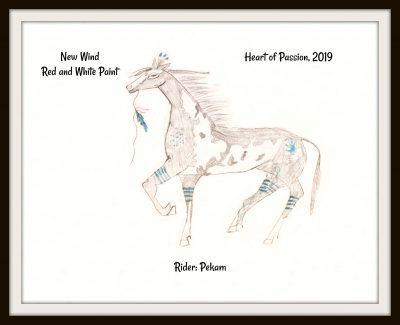 In all sports, athletes need to prepare for their upcoming race, game, or match.

In horse racing it’s the same, the horses need to train daily to stay strong for the demanding challenges of a race. Breezing is one type of workout and means the horse works entirely without urging at a moderate speed.

When breezing begins, the purpose is education and is used to maintain and assess the fitness of all racehorses. The first breezes are meant to get them into the bit and to teach switching leads at the turn, a maneuver needed on race day.

“Into the bit” refers to the horse’s willingness to move forward under their own power with a steady, relaxed contact with the rider’s hands via the reins.

Switching leads come from the hind legs and refers to altering which set of legs advances forward to the greatest extent when a horse is galloping. Switching leads can be crucial at the end of a race; switching the lead from left leg to right can give a horse a burst of renewed energy in the stretch run.

While Indian’s in the 1800s did not know such racing terminology, they did ride horses that were at the top of their game come race day. The horses were accustomed to traveling with their semi-nomadic owners. The hunted off them, raced for fun, and packed their belongings with the use of travois’.

New Wind, a red and white Paint overo, is one of these fit and courageous horses, which made him a strong racehorse. He has determination and trusts his owner/rider with his life. In Heart of Passion, the horses have to switch leads multiple times due to galloping around corners and over jumps and with any other obstacle in their path.

New Wind is a frame overo –– appears to be any solid base color (bay, black, chestnut, etc.) with white irregular patches added, usually with a horizontal orientation. Markings are often of jagged shape rather than rounded, the white rarely crosses the back, the lower legs tend to be dark, and the tail is one color, usually dark. The head is often white or bald-faced, and blue eyes are not uncommon.

Barb, Andalusian, and Arabian-bred horses—pintados, so-called for their distinctive two-tone coloring—arrived in North America along with Spanish explorers in the early 16th century. These horses became the mustang herds that roamed the continent’s western half. Native Americans treasured these colorful animals, breeding them and, in some tribes, infusing them with mystical beliefs.

English colonists eventually introduced Thoroughbreds to the gene pool, resulting in a strong, sturdy working horse that was extremely intelligent and steady on the trail. Some of these horses kept their spots, while some were solid-colored.

A handprint on New Wind’s rump signifies mission accomplished, which came to pass in Heart of Courage. Running down his left leg is a medicine snake. This is a reminder that the rider needs to be alert to the warnings of others. It is also a symbol of wisdom. Three feathers between his ears signify three coups counted, or in this case, three-horse race victories.

Pekam, Bobcat in Sinyekst, is Spupaleena’s younger brother and most trusted friend. He admires and aspires to be like his sister. They are the only two remaining siblings of four. Pekam is long and slender like an Aspen trunk. But don’t let that fool you! He is kind, giving, strong, brave, and determined.

Determined to stay in the race as long as his sister and father will allow.

As that is where his heart lies.

I often mention using my son’s and grandchildren’s names in my stories. Heart of Passion is packed full of them! I needed teams for this particular relay style of race and drew from my heart’s greatest desires––family.

Pekam happens to be my grandson Cameron’s Indian name. Both character and grandson are smart, dedicated, kind, and courageous.

It is always a thrill to read from the True to Heart Trilogy during book signings and various events because my family’s names run through the story like the strips of cedar bark in a tightly woven basket.

Pekam’s teammates are no exception.

Kook Yuma Yaw Yat – Tiny but Strong – is my youngest son Marshall’s Indian name. He was born weighing in at 2 & ½ pounds. So when I went to an elder in our community and asked what Tiny but Strong may mean, he smiled and replied, Kook Yuma Yaw Yat. Thank you, Tom Louie. My son may have started out small, but he has grown into a fine man with huge talents. Both man and character are determined, talented, and wise.

Pia – Red Tail Hawk – is my middle son’s Indian name. He is a tall drink of water at 6’2” and both man and character are intelligent, hardworking, and focused.

Kelowna – White Grizzly – is my oldest son. He is a leader, guided by wisdom and faith. Both character and man draw their strength from deep within their soul and lead with kindness, fairness, and boldness.

Seelwha Sn’e – Big Elk – is my add-on son, my husband’s son, and the oldest of our four boys. He is kind, witty, and giving. Both character and man are strong, hard-working, wise, and determined.

God has blessed us with amazing sons. For this I am thankful.

They climbed the steep, craggy hill, hugging a rock wall. He rubbed New Wind’s neck and shortened the rein in hope of preventing jerky lunges made by his anxious mount. Deep huffing breathes came from his horse’s mouth and from the horse flanking him. He waved his legs on his horse’s sides to keep the pace steady.

“Easy, boy,” Pekam said under his breath. “We will make it.” New Wind held the fast walking pace until they crested the hill. Once over the top Pekam let the red and white have his head. New Wind bolted down the hill and toward the finish rope. If only his sister could see him now.

The taut pack of horses remained intact behind Pekam. They jostled for position as the horses flew down the side of the knoll toward the finish rope a mere half-mile away. Pekam kicked and hollered, “Run!”

The introduction finale! By now, if you have read Change of Heart or Heart of Courage, you know Spupaleena and Bear. But do you know the rest of the horses and riders? Heart of Passion also has an added character. Who is this mysterious man? For that, you’ll have to read the story! But next week…you’ll meet the rest of Supaleena’s teammates and horses. See you then! 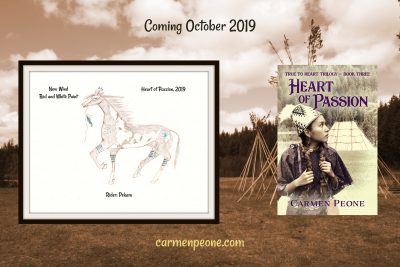 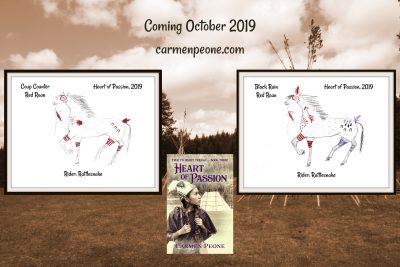 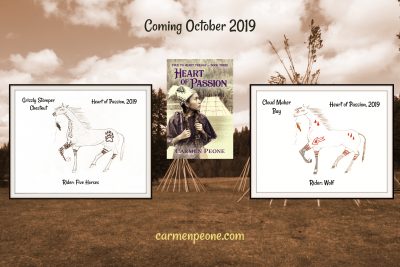 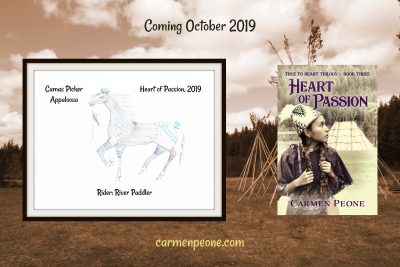