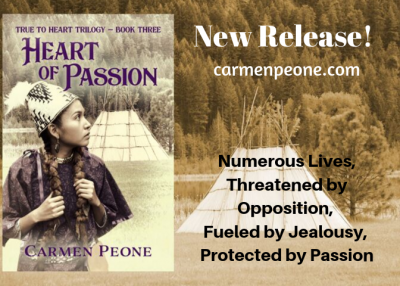 “Spup, you need a horse that has as much heart as you have.” – Heart of Courage

Spupaleena’s passion for horses runs deep in her soul. As deep as mine, I suppose. Perhaps that’s why we get along so well. Why my love for her is unending. You see, we’ve had a relationship for a couple of decades now as she’s been swirling in my mind from the beginning of my writing careers. She started it all.

We share the love of horses and family. Of being strong women in a man’s world. Of painted horses that run fast. One horse in particular––Bear also known as Buck.

Last Monday, I shared about the Paint breed. Click here…

Bear, Spupaleena’s main horse, is a classic Tobiano–– exhibits a dark and white coat pattern, with solid dark over one or both flanks and white legs. The head is dark with regular facial patterns such as stars, blazes, and strips. The markings are smooth and regular. Tail and mane hair can be of two colors.

Bear is modeled after my horse BuckSuperwind, “Buck,”  who is a tobiano Paint horse. I had previously used Buck in Extreme Cowboy races started by horseman Craig Cameron. Buck was just getting the hang of things and winning competitions when he began limping.

On one occasion, I was riding with a group of friends and we were walking downhill, Buck dropped his left shoulder with each step. I slid out of the saddle and ended up walking him back a few miles to where we started the trail ride.

After working with an equine vet and chiropractor, we got Buck in a place of comfort but I knew he would never be able to be ridden much after that. My heart sank. He was born and bred on the reservation (Colville), having both stock and thoroughbred in him. He loved to run!

Young horses with heavy workouts oftentimes become fatigued––not Buck! He would get stronger and faster. Now he is retired, often modeling for book covers and other book-related marketing events. You may have already noticed he’s on the Heart of Courage cover.

The same is true with Bear. He has heart! 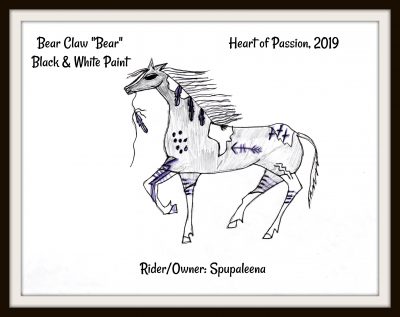 Spupaleena walked around him in a slow circle. Her fingers left streak marks across his black and white hair. Then ran down what looked like a white lightning bolt running the length of his left shoulder and spilling down his leg. She picked up a hoof. “Strong feet.” She nodded.

“Looks like a white bear claw over his rump.” Pekam ran a hand over the area.

Spupaleena agreed. White like snow covered all four legs up to the knees and on some legs higher.  She strolled to his head and traced the white blaze running down his nose. His soft, ebony eyes watched her, reflecting a gentle nature. He sniffed her hands as tears rolled down her face. “He is mine?”

“He sure is.” Jack patted Spupaleena’s shoulder.

Spupaleena laughed. “That name is a fine one, but I think Pekam is right. I will call him Bear Claw.” – Heart of Courage

This was the second best day of her life, the first being her reunion with her father a couple of springs ago. – Heart of Courage

Yet, it not just about Bear. Also on Spupaleena’s team of fiery equine are War Cry and Ivory River. 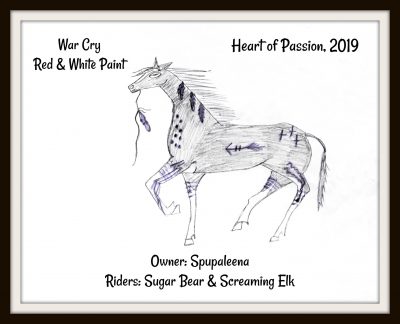 Walking the length of War Cry, an eight-year-old bundle of energy, Spupaleena glided her hand over his red, short back and spoke in a soft, soothing tone. “You are our strength and power. I trust you to keep the pace.” She cupped her hands around his eyes and breathed in his courage and determination. – Heart of Passion 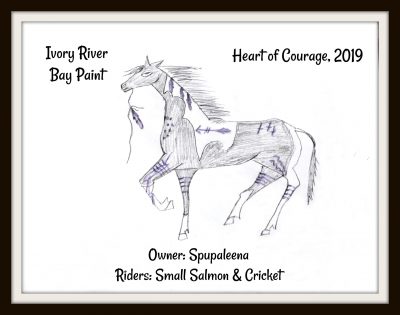 At age eleven, the bay painted horse was at his peak. He was stout and strong, short and full of grit. One word described him—tenacious. She scrubbed his withers, walked around him searching for any sign of injury, and ran a hand down the length of the white strip of hair starting at the top of his rump and running down his leg––his ivory river. – Heart of Passion

I needed a strong name. Ivory River is just that and named after my granddaughter, River Ivory Cohen, who has as much heart as this horse.

Spupaleena’s racing color is purple and her symbol is three crosses that represent Koolenchooten (God), the Son, and the Holy Spirit, all signifying her faith. In honor of her culture, she ties three eagle feathers on her horse’s manes.

Even back then, not all Indian’s held a traditional faith. Many like Spupaleena and her family came to know God thought the priests at the nearby forts.

In the beginning, when I started the original series in the late 1900s, Spupaleena was Emma Quill. Then it dawned on me, she would have gone by her Sinyekst name. So I got out my notebook from when I’d taken language classes from Elder Marguerite Ensminger and chose Spupaleena, meaning Rabbit, a strong yet gentle name, like the female character churning in my head. I chose an animal name as many of the Natives in this area had names of animals or weather.

While Spupaleena honors her traditions, she believes there is more in store for her and her journey would include horses. Perhaps it was the rebellious streak inside of her, the streak brought out when her father forbids her family to own the “worthless beasts.”

Then again, maybe it was the death of her mother, sister, and grandmother. Nevertheless, she persisted, determined to own, race, and breed her own stock, becoming a trailblazer for women in her fictitious era.

Will horses fill that empty spot in Spupaleena’s heart and help her heal? You’ll have to read this story and find out! 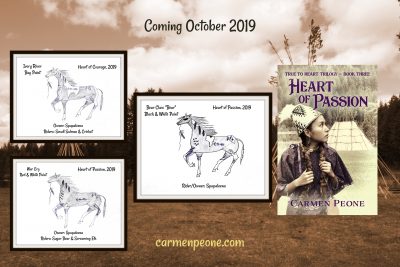 Last Monday you all got to meet Pekam’s teammates who carry my son’s Indian names. Click here for a recap.

Now you have the chance to become acquainted with Spupaleena’s teammates, which happen to be some of my oldest grandchildren’s Indian names.

My heart sings the cherished songs of my grandchildren…

Ta huht Skumheist – Sugar Bear – Skyla Peone, her father Kelowna or White Grizzly, is a determined and persistent little gal who loves to hunt with her father and papa. She is athletic, loves to sew, and enjoys riding horses.

Sarru Sarrus – Cricket – Naomi Cohen, her father Seelwha Sn’e or Big Elk, is our oldest grandchild. She has such a kind and gentle spirit, is an artist, is dedicated to family, and a loyal friend. Her long legs I’m sure will carry her to greatness.

Kook Yuma In-tee-tee-huh – Small Salmon – Carter Peone, his father is Pia or Red-Tailed Hawk, is a baseball fanatic, intelligent, and loving. He deems himself a “baby whisperer.” (Which is true!) He has a heart of gold.

Chy chy pum Sn’e – Screaming Elk – Eddy Cohen II, his father Seelwha Sn’e or Big Elk, is our oldest male grandchild. He is kind, thoughtful, and giving. He loves hunting and anything outdoors. His smile and eyes are infectious! And currently, is learning to drive with his newly acquired driver’s permit!

Spupaleena tucked her chin for a moment and let him run. He had a passion for it. She could feel it. And she had a passion for him. For his strength. For Koolenchooten. For life. And she was living it. At least until he killed her. She had to find a way to stay alive. To find a clear path.

As the handlers and horses for the next exchange came closer, Bear veered for Screaming Elk, pushing River Paddler’s horse out of the way. His ears were pinned on the familiar voice and the color and body movements of the one who would catch him and give him rest. Spupaleena leaned back, pulled on the rein, and set her body in position to slide off. River Paddler shot past them and swerved in a wide arc, scrambling around Screaming Elk and Sugar Bear. She drew in a breath.

Screaming Elk waved his arms over his head and shouted Bear’s name. He planted his feet, ready to catch the black and white barreling at him.

Spupaleena forced a held breath through her clenched teeth, tugged harder on the rein, and sank into her horse’s back, asking him to slow down. He took her cue and began to reduce his speed. She guided him straight for Screaming Elk. Inches away from him, Spupaleena slid off Bear, took three steps, and lifted herself onto the back of her squirrely sorrel. She cried out from the pain in her shoulder.

War Cry bolted forward. Spupaleena grabbed a hunk of mane, held on, and spanked him, keeping her aching shoulder and arm close to her torso. His front legs stretched and the animal sped up, keeping them in the lead. His left ear flicked back and forth, this time she refused to glance back. They rounded a corner, a rock bluff to her right, and climbed a small, slick hill.

The clay footing made for slow travel, but War Cry dug his big, black hooves into the ground and soldiered on.

Cold air slapped her face like a wet rag while her eyes watered and stung. She blinked, squinting into the sun. She lowered her chin to cut the wind, urging the big horse on. Spukanee Sun and his blue roan caught her and tried to pass, but War Cry thrust ahead as the pair kept trading off as forerunner on the thin trail.

In honor of release day, here is an image of my grandson, Asher’s, racing pony! 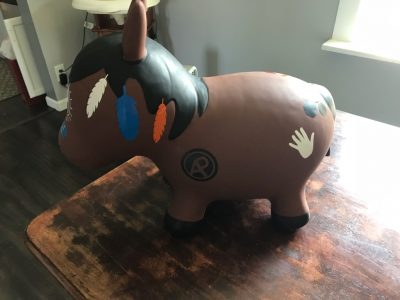 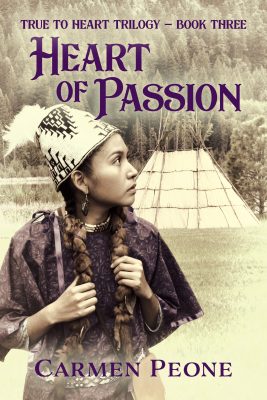