Have you ever listened to your heartbeat through a stethoscope?

When I began researching Lillian’s Legacy, I knew the female Welsh medical doctor would not be using a binaural stethoscope in 1875. But I wasn’t sure what she would be using, so I did some research and came across early photos of monaural stethoscopes. Monaural is another term for monophonic. It also means of or involving one ear.

The stethoscope was invented in France in 1816 by Rene Theophile Hyacinthe Laënnec (1781–1826) at the Necker-Enfants Malades Hospital in Paris. The early instrument was a wooden tube and later fashioned with a flat and circular shape on one end and a larger bell shape on the other side which is the style my character, Doctor Mali Maddox, uses.

In the early 1800s, and prior to the invention of the stethoscope, physicians would often perform physical examinations using techniques such as percussion or thumping and immediate auscultation. In immediate auscultation, doctors placed their ear directly on the patient to observe internal sounds.

Because Laennec was not comfortable placing his ear directly onto a woman’s chest to listen to her heart, he invented the stethoscope. His reluctance had caused him to discover that a rolled piece of paper could amplify sound. He applied this technique to heart sounds, placing a piece of rolled paper between the patient’s chest and his ear. This thrilled him as he would no longer require physical contact with women.

The device was similar to the common ear trumpet, an earlier form of hearing aid. His invention was similar in structure and function of the trumpet which was commonly called a “microphone” in those days.

Laennec called his instrument the “stethoscope.” The word stethoscope is derived from the two Greek words, stethos (chest) and scopos (examination).

Lillian rose to her knees, nodding. “I have. I want to learn your ways of medicine. To help people in need. Learn what the contraption you gave me is. Speaking of…!” She stopped to catch her breath and fetch the wooden instrument, holding it out to the doctor. “What is this?”

Doctor Maddox took it from her and caressed the wooden tube. “This was my husband’s stethoscope.” For a moment she held the monaural device to her heart. “It’s made of the finest cherry wood one can find.”

“Why would you give it to me?”

Doctor Maddox smiled. “Because I knew you needed to check your own heart. It seems to beat with young, vigorous life, but there is something holding you back. I can see it in your eyes. Hear it in your voice. A missing spark of youth.”

I have the pleasure of introducing two individuals from Wales who helped authenticate the Welsh language, character, and culture in Lillian’s story. 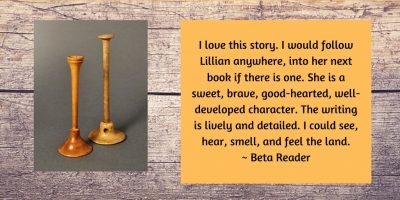