Mentoring a Realm Beyond My Own: 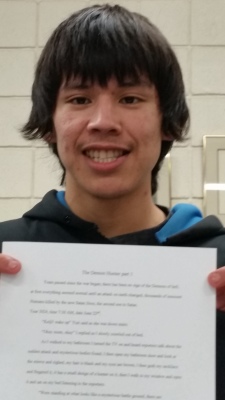 As I stated previously, I am not a fantasy writer and don’t know much about world building.  But I’m on a crash course of how-tos, quickly learning organization is the key. After scanning Nathan’s notes and seeing he had nearly completed a trilogy with many character names and worlds, the first step to establish some kind of order was to simply roll out and cut off two large pieces of paper from the school’s supply.  We listed main and supporting characters on this long sheet of paper and included their most influential qualities.  I say we because as he listed names to paper, I did the same to insure safe keeping of our hard work.  In addition to listing names, I made a simple pronunciation guide (example below). The sad thing is, these papers have been recently misplaced.  We think both sets have been inadvertently thrown away and my heart sinks.

Since this story is fantasy, names like Keiji (ke-gee), Mayumi, Eiji, Eisha (I-ee-sha), and Shima made sense.  I copied these names down with the correct spelling and am having to memorize how to say them and what world they call home.  I’m proud of Nathan’s efforts because each name also has a meaning. For example, Keiji means respect, Mayumi means true bow, and Eiji means prosperity and peace.

After rolling out and cutting another long piece of paper, we jotted down the worlds, described them, and listed who lived where. Some of the worlds include: Earth, Hell, Heaven, Mislonia, Henevor, Volt and Parallax.  I chuckle, recalling Nathan laughing as I practiced pronouncing the names of his characters. The funny thing is, I can relate to Nathan’s creative character names required for fantasy worlds as the Native names in my Heart Trilogy are traditional Native American names written in the Salish Language as taught to me by my mentor and elder Marguerite Ensminger, Nathan’s great grandmother.

I felt better having this information on the large yellow and green paper. But as I looked it over, I knew there were holes.  I knew there were missing pieces to this puzzle, but wasn’t sure what they were.  Fortunately, in three days, I was to head out to a book festival with an author friend who writes mid-evil fiction.  And so does her daughter. We were all meeting in Missoula, Montana for three days of book signing, fun, and fellowship.  I listed my questions and sure enough at dinner one evening we had a great visit about what Nathan needed for his characters and worlds.  I felt a sense of relief realizing Nathan was on the right track.  All he really needed was the governing factors of his worlds. Along with more depth to his characters.

Once back at school, he dug deep.

I know as Nathan continues to write, his characters and worlds will expand as he creates and edits. Nathan is on the road to a great story with fascinating characters.

One book we are currently studying is Getting into Character by Brandilyn Collins.  Collins draws from her Method acting theory that theater professionals have used for decades.  Her methods create characters whose distinctive traits become plot components though 7 secrets of Method acting translated for authors and writers alike.

The first thing we worked on was Secret 1: Personalization.  This involves getting to know the main characters on a personal level by discovering character inner values that pull traits and mannerisms out of the pages and into the heart of the reader. This has helped bring Nathan’s characters into a strong three dimensional nature making them true to life. While we don’t just display one emotion all the time, neither do our characters.

Every Tuesday, his storyline strengthens and his writing blossoms as his main characters fight to keep their way of life.

If you have other things in your life—family, friends, good productive day work—these can interact with your writing and the sum will be all the richer.
– David Brin