Do you remember me stating previously that Nathan’s character and world sheets had vanished? Well they remain in the depth of some dump site, but Nathan was able to rewrite most of it. Unfortunately they are not as detailed as before, but he’s off to a good start. And he can always add as he goes which is the beauty of writing. 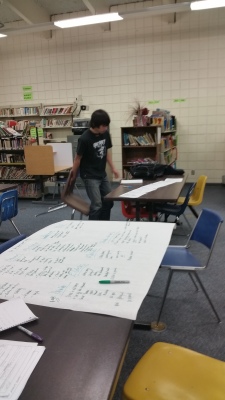 One day last November I got a bright idea. This is a rare occurrence these days, but it did happen. Nathan needed to read a book similar to his work in progress that showed a good example of another government or way of life as J.R.R Tolkien had in Lord of the Rings. Not necessarily with other worlds, but communities with unique governing rules. I came up with The Giver by Lois Lowry. Although he was willing to study this book and it was shorter than The Lord of the Rings, time was a factor. As anyone in the school system knows, a senior has little extra time to spare. Nathan is no exception. So to keep his workload light, I suggested watching the Hunger Games DVD.  I had watched this movie a couple of years ago with one of my sons and knew this would work because it boasts 12 Districts, each having its own set of rules based on a government of fear. 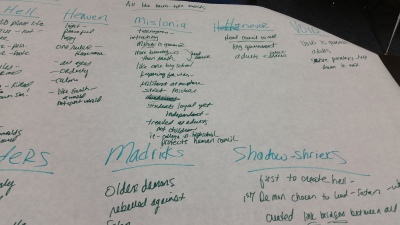 One of Nathan’s teachers overheard our conversation realizing neither of us owned a copy of the Hunger Games DVD and piped up, announcing she had the Divergent DVD. I had no idea what a divergent entailed, but was game.  We watched the movie as I took copious notes and used the examples of their Factors and the Factors’ governing rules to compare with Nathan’s worlds. 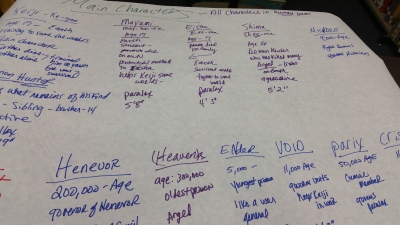 Each world has to have a ruler and its own laws or there is nothing but chaos, unless chaos is what the writer wants. In structuring a novel, chaos is not the ally, it’s the enemy.  So to help Nathan organize his novel and truly know the depths of his story, he will need to answer these questions in the New Year to enhance his characters and his worlds:

We have been working out of Writing Fiction for Dummies by Randy Ingermanson and Peter Economy. I heard of this book at a writer’s conference last March and it has been a valuable resource to flesh out my work in progress and assist Nathan with his.  I think all levels of writers will benefit from this book. I know we have. There are many great examples of technique to make writing and selling a novel a snap.

Until next time. Merry Christmas and Happy New Year!