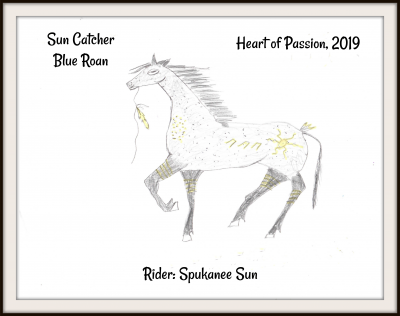 Welcome to the official team introductions for Heart of Passion!

I’m flinging open the gate of this pre-launch with Sun Catcher, a blue roan, and his rider Spukanee Sun.

While planning this book the thought came to me, Spupaleena needs more competition, don’t you think?

Why yes, I answered myself. She definitely needed added rivalry, and I knew just where to find them.

My husband, Joe, a member of the Colville Tribe, happens to have relations on the Spokane Tribe (There were a lot of French trapping Peone’s that came down from Canada) and since this story includes many of our family (some of the racer’s names include my son’s and grandchildren’s names, more to come on this), so I thought, heck, why not?

Are you familiar with the Spokane Tribe of Indians in eastern Washington? If not here is a short history lesson:

To the southeast of the Colville Tribe, the area my main character Spupaleena is from, lies the Spokane Tribe of Indians, or Spukanee as they were called prior to the official Spokan. One thing I found that fascinated me concerning etymology, the study of the origin of words and the way in which their meanings have changed throughout history, was the origin of Spokane or Spokan people. It was not until 1883 that the “E” was added to Spokan, making the city known as Spokane Falls. The Spokanes are known as Muddy People, or Sun People. White trappers used to refer to them as the People of the Sun.

One of their native legends says that the term Spokan came from the noise a snake made when a person beat on a hollow tree where the snake was hiding. Along with Spupaleena and her Sinyekst, or modern spelling of Sinixt, the Spokan people of Washington Territory were semi-nomadic, following fish, game, and plants on a seasonal basis for nine months of the year, and settling in permanent winter villages for the other three.

They lived along the banks of the Spokan River and in the west by the Columbia River. Salmon was their main staple until Grand Coulee Dam was built in 1942 and halted their migration from the Pacific Ocean to the waters of the Columbia River into Canada.

With all of the above research, it seemed appropriate to call the horse Sun Catcher and have a yellow sun painted on either side of the animal’s hindquarters when racing. Traditionally, horses were painted when going to war, as were their riders, and decided to use the paint in races as they do today.

If you notice above in the picture I drew, on Sun Catcher’s rump is a sun which identifies his name and owner’s location and tribe. On his chest and sides are hailstones, a prayer for hail to fall on the enemy; and on the top of his tail is coup counted, or in this case races won. He has won three races.

Spukanee Sun’s face is as soft as his heart. Although at first, he appears as rough and hard-hearted as the rest of the racer’s Spupaleena deals with. For this team, and next week’s team, I kept horse’s and rider’s names paired to today’s tribe and location, both in eastern Washington, for a sense of geography.

Spukanee Sun is a confident rider. He proves himself trustworthy and gives Spupaleena important information that may give her closure concerning Sun Flower (Sun Flower joins the family in Heart of Courage – Book 2 for a short time). Or may not, you’ll have to read the story to find out.

To her left came the sound of a man clearing his throat. He examined her, a half yellow sun stamped on the left side of his face, edging his broad nose. His buckskin shirt was adorned with trade beads of a full sun, its golden rays splayed outward in various lengths around the orb. His blue roan displayed the same design on his rump. She wondered if his name was Sun Catcher. She’d heard of the horse and his numerous wins.

The two young men exchanged glances and nodded to each other. Spupaleena grunted and held her gaze on River Paddler’s dark eyes. She had hoped the two teams would be different, accepting of women racers, but they appeared to be like all the others––vulgar and hostile.

She circled them and went back to her family, her body trembling.

I hope you enjoyed learning about Spukanee Sun and Sun Catcher.

I’d love to hear your thoughts!