While in Santa Fe, NW I discovered Kateri Tekakwitha, (pronounced “ˈɡaderi deɡaˈɡwita”) a Mohawk woman. She is the first Native American woman to be recognized as a saint in the Roman Catholic Church. As a friend and I were walking along the streets of Santa Fe before our writer’s conference began, we came across a Catholic Cathedral located on the other side of our hotel. To my surprise the statue of Kateri Tekakwitha, created by Estella Loretto, a Jemez Pueblo sculptor, stood majestically outside of the Cathedral at the Basilica of Saint Francis. Loretto calls the statue “Blessed Kateri.” The statue enticed me and I knew I needed to pursue all I could about this inspiring woman.

Kateri was born in 1656 in the Mohawk community of Ossernenon, on the south side of the Mohawk River, now Auriesville, N.Y. She was the daughter of Tagaskouita, an Algonquin woman, who had been captured in a raid, then adopted and assimilated into the tribe. Tagaskouita had been baptized Roman Catholic and educated by French missionaries in Trois-Rivières, east of Montreal. Mohawk warriors captured her and took her to their homeland. Tagaskouita eventually married Kenneronkwa, a Mohawk chief, and they had Tekakwitha and later a son.

Kateri was of the turtle clan and at age 4 was orphaned when both parents and a brother died in a smallpox epidemic. The disease affected her eyesight and her health, leaving huge pits on her skin and on her face. The scars were a cause of humiliation in her youth. She was commonly seen wearing a blanket to hide her face. Kateri Tekakwitha was then raised by her uncle, who was a Mohawk chief.

At age 19, Kateri converted to Catholicism and took a vow of chastity, pledging to marry Jesus Christ. She was baptized in 1676 at age 20. Because of her skin and subsequent humiliation, she refused to marry, even at the urging of her adoptive family at age 13, which was Mohawk custom. Her decision was disliked by her adoptive parents and their neighbors. Some of her neighbors went as far as starting rumors of sorcery. To avoid persecution, she fled to the Jesuit mission village of Kahnawake, south of Montreal in New France, which is now Canada.

Legend states that Kateri was devout in her faith. She prayed for the salvation of her fellow Mohawks. Jesuit missionaries that served the community where Kateri lived reported she often fasted and when she would eat, she would taint her food to diminish its flavor. On at least one occasion and perhaps more, she burned herself, which was common among the Mohawk, as were other self-mutilating practices. She was known for placing thorns on her sleeping mat. 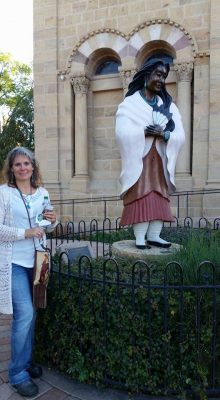 She became skilled at traditional women’s labor, which included sewing clothing and belts from animal skins; weaving mats and baskets from reeds and grasses; and preparing food from game and crops.

Unfortunately, Kateri was quite ill. Her practices of self-mortification and denial may have diminished her health. Five years after her conversion to Catholicism, she became ill and passed away at age 24, on April 17, 1680. Witnesses stated that minutes after her passing, the smallpox scars vanished and her face appeared radiant and beautiful.

Tekakwitha is the name she was given by her people upon birth. In Mohawk, it means: “She puts things in order.” Kateri is the Mohawk form of Catherine, which she acquired from St. Catherine of Siena. And it was after her death when Tekakwitha became known as the “Lily of the Mohawks.”