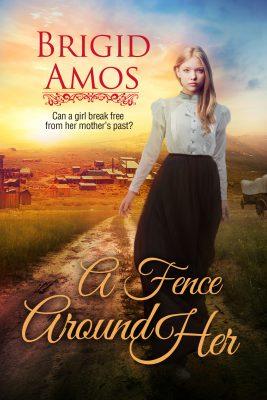 I would like to welcome friend and fellow Women Writing the West YA author Brigid Amos and A Fence Around Her. This story is transparent, authentic, and healing. A fantastic read for youth struggling with real family issues. It is evident Brigid’s research is exhaustive with clear descriptions of mining and Bodie, California. Her characters are authentic and age appropriate. This is a great story for youth in and out of the classroom.

Can a girl break free from her mother’s past? Will she?

When I first started writing fiction, I struggled with the oft-repeated advice to fledgling writers: “Write what you know.” Well…ok…I knew some things. But every time I set out to write only about the things I already knew, I ran into a brick wall. Why? Because when I wrote about those things I knew well, I realized that I was writing fiction that I myself did not find particularly interesting. I had recently moved to Northern California and joined a local writing group called Sierra Writers. At one meeting, one of the members who, unlike the rest of us, had some real world publishing success was speaking to our group. Someone asked her about this “write what you know” thing, and she looked right at that person and said, “Don’t listen to people who tell you that you have to only write about what you know. Instead, write about what you are interested in.” That changed everything for me.

This happened twenty-two years ago, so I no longer remember who that writer was, but I’d like to thank her for setting me on a completely different path. I lived in western Nevada County, first in Grass Valley, and then later in Nevada City. That area is steeped in Gold Rush history, and unlike other places where gold was discovered, significant mining activity continued well into the twentieth century, leaving well-preserved infrastructure that now serves as museums and historical parks. I caught “Gold Rush Fever” and started devouring books on the subject and visiting historical sites all over Gold Country. Eventually, I started writing about the Gold Rush, not because it was what I knew, but because it was something I wanted to know about.

Then came Bodie. One evening, I was watching a local travel show called California’s Gold. The host, Huell Howser, was visiting a ghost town in the Eastern Sierra. I was so taken with the abandoned town left to decay in those desolate, treeless hills that I packed up my dog, a sleeping bag, and a tent and headed for the campsite closest to Bodie. To actually visit the place I had fallen in love with on TV was an amazing experience. The first thing I did was take a tour of the Stamp Mill, where ore was once crushed into dust in the first step in extracting gold and silver. The tour guide, dressed in period costume, claimed to be the head machinist of the mill. He became the first character in my young adult historical novel, A Fence Around Her. I modeled Mike Conoboy, the father of my protagonist Ruthie Conoboy, on the “head machinist” who gave us a fascinating and entertaining tour of the Standard Stamp Mill.

The first question I would ask any writer looking for subject matter would be, “What are you interested in?” It’s a great starting point for both fiction and nonfiction.

Having a mother with a past is never easy. For Ruthie Conoboy it becomes the struggle of a lifetime in 1900, the year Tobias Mortlock arrives in the gold mining town of Bodie, California. Ruthie is suspicious of this stranger, but her trusting father gives him a job in the stamp mill. Soon, Ruthie suspects that her mother and Mortlock have become more than friends. Can Ruthie stop this man from destroying her family?

When I left the house that day to go to the Sawdust Corner Saloon to fetch my father, the day we met Tobias Mortlock, my mother was still lying in bed moaning as if from a mortal wound and threatening to do herself harm. While I was gone, she had gotten up and tried to console herself by working on her latest landscape. But something had gone wrong, for when we came through the front door into the parlor, we found my mother slumped on the floor. Her silk dressing gown lay in folds around her and her blond curls stuck to her head in a multicolored array. Little pots of oil paint were scattered across the floor dribbling the last of sky blue, forest green, and yellow ochre onto the Persian rug.

“Lilly, what have you done?” My father reached down and lifted her to her feet, then walked over to where the easel lay collapsed on the floor and righted it also. He peeled the wet canvas from the rug and set it on the easel, then stepped back to have a look at it.

Somewhat distracted by the bits of red fuzz from the carpet embedded in the wet paint, I fixed my eyes on the canvas, trying to sort out the swirls of color into a cohesive image. My mother waited silently for our verdict. She seemed, in that moment, as fragile as a sparrow. I was relieved when my father broke the silence with his jovial critique.

“Why Lilly, it is the spitting image of Mono Lake. Yes, here are the islands in the center, and here the mountains rising up in the background. It is quite an impressive site, just as we saw it that day.” Two summers before, my father had taken us on a trip to the lake on the narrow gauge railroad that brought us firewood from the lumber mill on its southern shore. I remember how much my mother enjoyed that rare outing, saying over and over that the lake reminded her of the San Francisco Bay.

“It’s a fine painting, Mother,” I said. She moaned.

“No, Father, she didn’t say anything. She only made a sound.”

“Not good enough!” Mother wailed. Her sticky, colorful curls quivered like bunting in a light breeze.

“That’s not true, dear,” my father said. “You are a fine artist. It’s these fools in this town who don’t appreciate it. Look around at all the beauty in this parlor! Every day, I come home and think, who else has so many beautiful works of art on their walls? Maybe just Leland Stanford, Randal Hearst, and me.” He reached out to brush back her sticky hair. She slapped his arm away, smearing paint on the cuff of his sleeve.

“I’m not talking about the stupid painting,” she said. “It’s me. I’ll never be good enough, not in Bodie.”

At this she let out a wild scream and shook her head as if fending off a swarm of bees. Oil droplets sprayed in all directions, and I looked out the window to see if anyone could have heard. Mortlock had long moved on, and the street was deserted.

My mother stopped shaking and screaming, but she was still furious. “I am so sick of hearing about how you did me this grand favor by marrying me. If you’d wanted to do something for me, you would have taken me away from this awful place. You would have taken me somewhere people didn’t know me, where I could have been a regular woman.”

My father looked at the paint-spattered rug. “Ruthie, why don’t you go in the kitchen and start boiling water. I think your mother needs a bath.”

As I lit the stove and poured water into pots, I could hear their voices in the parlor, still going back and forth as they always did. Hers was like a mournful violin, his like a jolly French horn hopelessly out of step with the violin. Together they made a dissonant sound like musicians trying to play a duet, but each playing a different piece of music. And it never mattered what they were playing since it was always a variation on the same theme. 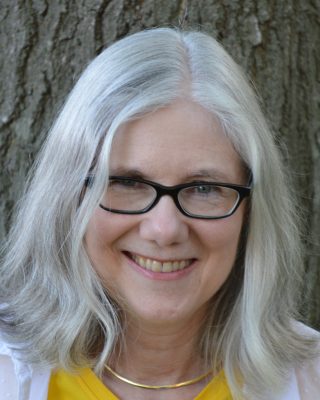 Brigid Amos’ young adult historical fiction has appeared in The MacGuffin, The Storyteller, Wilderness House Literary Review, and Words of Wisdom. A produced playwright, she co-founded the Angels Playwriting Collective and serves on the board of the Angels Theatre Company. She is also an active member of Women Writing the West and the Nebraska Writers Guild. Although Brigid left a nugget of her heart behind in the California Gold Country, most of it is in Lincoln, Nebraska where she currently lives with her husband.

Please feel free to leave a comment and your name will be entered in 1 of 3 e-books of your format choice for A Fence Around Her!