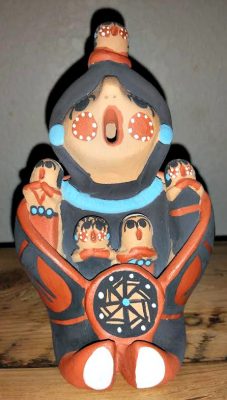 When in Santa Fe, New Mexico last month I was browsing local art stores one morning with a friend. I really had nothing in mind. As my gaze swept from rugs to jewelry to pottery, I thought about what I could bring home that was unique to me. I wanted something memorable. Something with a history and a past. Something with a story behind it.

In the backroom of Turquoise Trail Fine Jewelry and Art, I saw open-mouthed clay women with children surrounding them. Ones with a few babies, some with seven or twenty, and a couple antiques with 100 babies. Some were in pots and others on a turtle or simply sitting, holding those little ones close.

The storyteller, according to a local artisan, is a clay figurine made by the Pueblo people of New Mexico. The first contemporary storyteller was made by Helen Cordero of the Cochiti Pueblo in 1964 in honor of her grandfather who was a tribal storyteller. The clay dolls are figures of storytellers, usually a man or a woman and their mouth is always open. He or she is surrounded by figures of children and other things, who represent those who are listening to the storyteller. The woman is based on the traditional “singing mother” motif which depicts a woman with her mouth open holding one or two children.

Having lived on the Colville reservation for almost three decades now, I thought about the coyote stories that have been orally handed down for generations. I was drawn to these figures in such a powerful way. It felt like home. 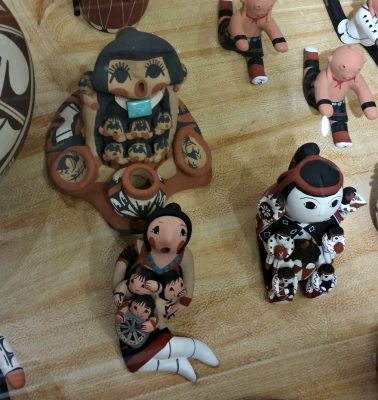 After some searching, I was able to find a clay storyteller from a local artisan vendor set up outside the Palace of the Governors museum who was selling his wife’s clay dolls––Helen Sando-Garcia from Santo Domingo Pueblo, New Mexico. I wish I could have met and talked with her because with other vendors, all dolls are unique to the artisan. One artist’s trademark was a long braid. Some have holes in the bottom, others don’t. But they all have a signature to testify the storyteller’s authenticity.

The storyteller that drew my interest has a blanket wrapped around her children in a protective manner. Her hair is in a bun, her eyes are big and appear happy. She wears turquoise jewelry and her children appear joyful. She makes me want to sing and pass on my husband’s tribe’s legacies. She inspires me to pass on the tradition of gratitude, love, and kindness. 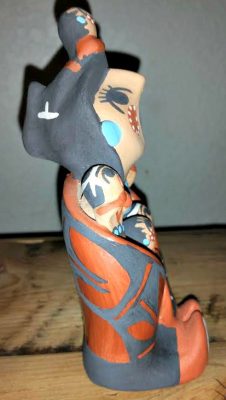 I bought my storyteller with five babies who represent the five children I wished for when I was first married. I was blessed with three due to difficult pregnancies. Doctors advised me to stop having children after the third one. My husband and sons complete me and I’m thankful for them.

The storyteller has a voice and so do you. I think we all have a voice and stories to tell whether it’s for the public, family, or privately in a journal.

What’s your story? I hope you’ll write it down, at least as a legacy for future generations, like the Pueblo storyteller has. I have a feeling that someday your children and other family members will want to remember the old days that have passed them by, hanging on to a piece of you even if it’s simply written in a notebook.

~   In any project the important factor is your belief. Without belief, there can be no successful outcome. William James