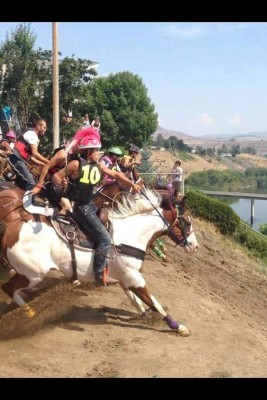 Research fascinates me. I love it because most of my research is face to face or over the phone interviews with Colville Tribal Members. In the past, many had been elders.  Some of them are friends and some of family members. Some have passed away. Because I’m married to a Colville tribal member, I am fortunate to be able to speak with such influential folks on the reservation––right where I live.

Lately I’ve been working on a book about a young girl who wants to jockey in the world famous Omak Suicide Race, which consists of racing a horse down a steep hill, through water, up onto a dike, and into the Omak rodeo arena. Some folks have concerns for the horse’s safety, but I must tell you these horses are just as much athletes and warriors as are their jockey’s.

These animals are trained for ninety days prior to the race each year. Some race on flat tracks as well. Some of these horses were to be put down, but found their calling on “the hill” and were saved and have become successful.

I know much of past research about Native Americans came from the non-native point of view, but I’m blessed to dig deep and go straight to the horse’s mouth, if you will. That is where fabulous facts rest––from generations of oral legacies.

So far, I’ve been able to talk with three Native men and women involved in the event. They have shared what the Suicide Race means to them and it’s one of honor. A rite of passage. I was brought up watching horse and warrior run this race. Become men and women and represent their heritage with pride. And now to create a factious story based on truth and fact is nothing short of an honor.

This year I will sit in the stands and observe the event with fresh eyes. Not as a spectator, but as a writer, watching every little move, gaze, and ripple of muscle on horse and human. I will notice fear, courage, relief. I will cheer for those I know and those I don’t. And pray for all.

Yes, research digs up nuggets of new and fresh information and enlightens me to the past and present. It gives me a connection to the things of this world I wouldn’t have known otherwise. I’m thankful I became a writer and author and I’m thankful I married a Native American and have had the opportunity to learn and be a part of such a rich culture.

~ Not that the story need be long, but it will take a long while to make it short.  – Henry David Thoreau

The Gardner Sibling Workbook is on sale for only $