Dreams are meant to come true. God says when we commit our dreams and desires to Him, He will bless them. Some of you may not think a day on a sweaty, balking horse in the bushes, mud, and rain qualifies as a dream. But for me, it is and God blessed me recently with a day of driving cattle into the mountains with my step-son Eddy, youngest son Marshall, grandson Eddy, and more.
For Eddy and his wife’s wedding last summer, a friend gave them a cow to start their herd. What a gift! He purchased a few more cows, a bull, had some calves, and now it was time to turn them out with his father-in-law’s cattle in the high country.
The day came when Eddy needed some help and called me, asking if I could lend a hand. Time stood still as a smile bloomed on my face that was as bright as a sunflower. Of course my answer was yes.
I immediately jumped on my husband’s horse, as mine is recovering from a shoulder injury, and began to get her, and me, in shape after a nice long winter’s rest.
Thunder cracked that Friday morning at 06:00. My alarm was set for 06:35. I laid in bed as a second boom shook our house, but I didn’t care, I was ready to get up, load up, and head out. Yee Haw!
I arrived at Eddy’s ranch at 08:30 and unloaded our massive Dun mare. She snorted, I saddled up, and then we all headed out: six on horseback, five in two side by sides, and one cow dog named Hombre. The first half was pretty easy as we followed the herd up a draw on an old road. Once we hit the halfway point our work began as I swear those beasts had a plan all along to ditch us as soon as the perfect moment arose.
At that said moment, cows suddenly split in several directions hiding in the thick brush, down in the boggy creeks, up narrow draws. There were a few that stayed on the road, turned to us, and laughed their silly heads off. Even the calves seemed to snicker, especially the little black and white who was a couple days old and lagged behind. 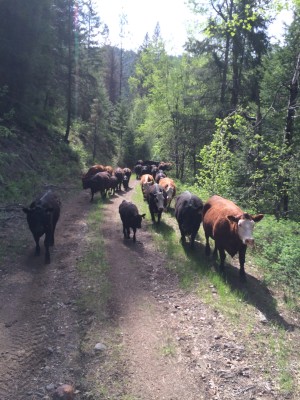 Horse’s necks lathered, sweat dripping down their legs. Their heads dropped and their sight focused on the rebellious critters as we formed a human corral and circled them up time and time again. 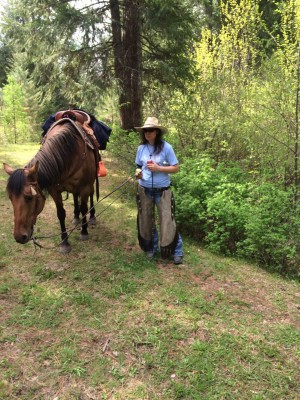 Three hours later, they were at the top and resting, eating,snug as a bug in some of the most beautiful mountain ranges of Northeast Washington.
Needless to say, the thunder ceased, the dark clouds turned from death black to dull gray, parting in areas to allow the sun to shine down on us. It never did rain. But the aromas of pine and wildflowers tickled our noses, invigorating our spirits. A perfect day to move a herd for the summer. 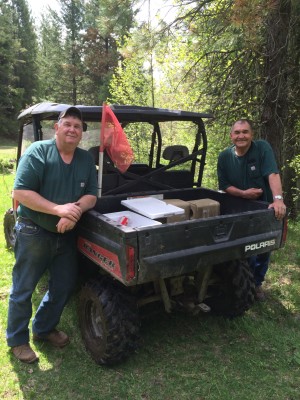 …elders to give us wisdom… 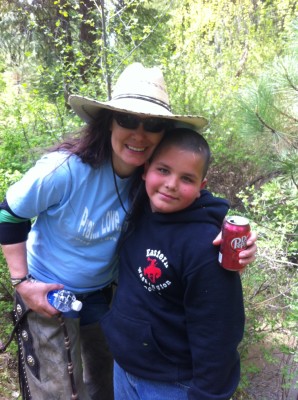 …and grandsons to drive cattle with.