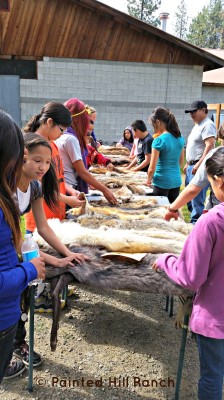 Welcome back! Today we will continue on with Rick Desautel and Furs of the Fur Trade.  Today we will talk about cats and dogs in northeast Washington.

For those of you who are just joining in, here is the scoop on the Fur Trade Festival:

Every year the Lake Roosevelt National Recreation Area’s education specialist, Janice Elvidge, heads up the Fur Trade Festival at the Kettle Falls Historical Center and Mission Point that perches above Lake Roosevelt at Kettle Falls, WA which is a section of the Columbia River from Grand Coulee Dam to the Canadian border.

This year was the fourth annual event for grades 3-6 held June 2, 2014. Sessions this year included: Furs of the Fur Trade, David Thompson and David Douglas at the Kettle Falls, Fur Trade Tools, Traps, Fire and Firearms, Fire Starting and Rope Making, Indian Sign Talk, and Tools and Women of the Fur Trade.

Area schools and their classrooms participate.  I think I was the only program coordinator/teacher who brought an after school program––Rez Stop (Raising our Educational Zone and Standing Tall On Pride). So we actually had grades 3-7 represented in one group and the students had an exciting and education time learning about the old days and how people survived and traded.

So as promised, let’s investigate the large animals: cats and dogs.

No not the kind we keep as pets, name, hug, and teach tricks. But bobcats, mountain lions, raccoon, wolves lynx, and fox. Wait a minute. Raccoons? Really?

Interestingly enough, Ricky Desautel put raccoons with the dog family in his line of pelts because dogs are the closest to raccoons as one gets. A cousin perhaps. Yet the babies are called kittens. Meow? One thing we don’t want to do is feed them because raccoons are very destructive animals. They terrorize real kitties and will trash possessions, especially ones garbage. It is best to call fish and game, or someone in your area that is qualified, and set a live trap to remove these fun looking animals and haul them of into the deep woods.

In our area timber wolves are sneaking their way down from Canada. They were once extinct in the United States. They are very family oriented and live in what are called packs. There can be 4 to 20 dogs in a pack with the mother and father, the alpha and omega, and they are the only ones to have pups. The rest of the dogs in the pack, no matter their age, care for and protect these pups.

Currently the Colville Tribes Fish and Wildlife unit have 3 wolves collared so the wolves’ habits can be monitored and the dogs can be managed. A balance with deer and elk herds and wolves is a must because this is the way Natives feed their families. There is also a concern with cattle ranchers because the wolves love to devour baby calves. This, as you suspect, will hurt the ranchers. So balance is important for everyone.

The coyote is the most adaptable animal. They do not live in packs to survive. Yet the coyote carries disease like rabies and typhoid so their fur was skinned quickly in the 1800’s and the carcass was discarded immediately to keep the humans healthy.

June is the breeding season for dogs and cats; babies are born in late February and March. Like any baby animal, they look cute and cuddly. But never touch a baby cat or dog that is in the wild as their mamas are surely close and ready to protect their young.

Next week we will touch on items that were traded during the 1800’s at the Hudson Bay Company.

Thank you for stopping by and see you next time!

The Fur Trade Festival is sponsored by:

The Gardner Sibling Workbook is on sale for only $