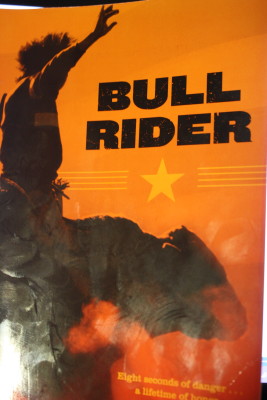 Searching for topics for my next book, and after visiting with another writer for youth, Bull Rider by Suzanne Morgan Williams was recommended to me. And what a great suggestion it was.

I write for youth, but I write historical books with a Native American theme. As I’m searching for agents and editors, it came to my attention that historical young adult fiction in not on their top to-read list. So it was suggestion that I turn to contemporary themes as I continue to hunt for a home for my work in progress. Luckily, I have some ideas for young adult books that are not historical written down on my to-write list.

Rodeo being one of them. But not bull riding. As my family comes from bronc riding and since I barrel raced in college (long ago), I will lean in that direction. Pun intended. My husband bronc rode. My step-son bronc rode. Our youngest still dabbles in it. It just seems natural.

As natural as getting my hands on Bull Rider; a nugget for me to glean ideas from. And since it was such a great read, I want to share it with you. The book’s setting is in Salt Lick, Nevada. My dad came from Gabs, Nevada so there is an instant connection.  Salt Lick is a fictional town; however, additional towns and cities mentioned in the book are real.

And with a name like Cam O’Mara, Cameron (I have a grandson named Cameron and as you see this just keeps getting better and better for my inquisitive feelers) Bull Riding has my full attention. I’m counting how many of my grandsons and students I work with will want copies for themselves, not to mention getting the book in our school library.

Unfortunately when Ben comes home, he’s wounded. Badly. And you see, there is this bull named Ugly who’s never been ridden. Hospital bills are mounting. Cam, with the help of a friend, tries to stick on a bull’s back one day after school. And he does. He’s hooked. The rush of adrenalin grabs and hold him hostage.

So what if Ugly’s never been ridden. Ever. And he’s about to storm into the professional bull riding circuit.

Cam thinks he can ride this bull and win the $15,000.00 purse. He knows he can. Especially after many successful attempts on other bulls as he’s been working his way up to Ugly. He can smell that money and it’s better than the family’s cows being sold off before spring. So what if he’s a minor. He’ll find a way.

But what about the skateboarding competition he and his friend are signed up for? Can he do both? Perhaps.

Will you buy the book and find out?