Legends are American Indians greatest teaching tool of life skills elders have for the younger generations. Most include Coyote, a trickster, and his lessons of foolishness. These stories train youth and give them wisdom into the world of right and wrong and common sense. This is an excerpt from Delbert’s Weir: the legend of how Coyote brought Salmon the the Arrow Lakes People up the mouth of the Columbia River (at the Pacific Ocean) to the Kettle Falls in northeast Washington State.
Legend Excerpt from Delbert’s Weir:

Delbert closed his eyes and shouted above the downpour. “As I said before…the people were dying from starvation. The great evil spirits of the warm land south of here built a mighty dam that spanned the width of the Columbia River and closed off the trail salmon swam for years. The people began to dance and pray day and night. They asked the Creator how to open the salmon trail so the fish, which was their main source of food, could return and reproduce in the mountain streams. My pa says salmon spawn up Hall Creek, but don’t make it as far as we are.”

Jed jerked his head up. “They do?”

“I’d love to see one. Can you imagine us snaggin’ one of those? My uncle told me some of those fish are as big as the little ones in the village.” Jed’s voice rose to a higher pitch.

“We forgot our hooks, remember?” Ross chimed in.

Images of holding a giant, slimy salmon ran through Delbert’s mind. He breathed deep and swore he smelled it cooking over a fire. His gaze shifted to the flames in the pit: blue, orange, red. They danced like a warrior at a Sinyekst celebration, taunting his hunger.

Delbert picked up one of the sticks and poked at the fire as if a fish dangled on its tip and continued. “Coyote heard and came to the rescue.” He wanted to move the story along before Ross’s snide remarks destroyed Jed’s excitement, and his own. “He volunteered to go to the warm country and break up this dam of evil monsters. The people cheered as they envisioned the water spilling over. Coyote set off on his long journey south and after many sundowns, he drew near the dam close to the ocean, or what they called big waters of the Columbia River.

“Coyote shape-shifted into a cooking basket and wiggled himself onto the river. He floated downstream and swirled with the current. There were two sisters, Snipe and Little Snipe, who kept watch over the dam for the evil spirits. They thrived off killing salmon as the fish came close to the stick wall.

“Little Snipe spied the small basket and she squealed with delight. She plucked it out of the river. When she and her sister returned to their tipi, she used the basket as her eating dish. She filled it with salmon and gobbled up the fish. Her sister pounced on Little Snipe. She scolded her for being greedy. Little Snipe quit eating, yet her belly growled with hunger. She set the basket aside. She eyed salmon hanging out the sides of the basket. Her mouth watered. Reaching for the basket, she gasped as it stood empty. Coyote ate the salmon.”

The rain let up to a light sprinkle. Delbert gave Ross a sideways glance and grinned––he was still awake with this head tilted back.

At least he isn’t snoring.

Jed stirred the coals and banked the fire with a few logs. “What did the Snipe sisters look like?”

“I don’t know. I asked Pekam awhile back. He didn’t answer.” Delbert stared at the fire.

“Maybe the elders want each person to figure that out on their own. See what they wanna see.” Ross’s big nose poked out of the shirt over his face.

Delbert’s gaze jerked to Ross. “You surprise me, Ross. You actually came up with an intelligent answer. I bet you’re right.” 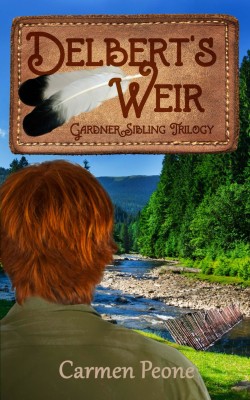 In a time when the west was still untamed, sixteen-year-old Delbert Gardner leads two friends into the backcountry for a three day adventure. Little did they know three days of hunting and fishing would turn into eight days of near starvation, injury and illness. When hope of returning home seems out of reach, Delbert recalls watching his Native American friends construct a fishing weir and sets out to build one himself. To him, it is the only way out.