I hosted the 2nd Annual Cowgirls for Hope Retreat at my house the end of June. For years I talked about hosting an event like this. Then several years ago I met Melody Biehl in Spokane raising money for her non-profit Because There is Hope.

A friendship sparked right away as we both strive to offer hope to people in different ways; hers for cancer patient in need of free lodging, and me for those who feel hopeless for whatever reason. I told her about my dream of having a cowgirl retreat at my place located near the Columbia River with miles of riding right off the ranch. She offered to team up with me and we began planning.

The first year was in 2015. I had notes from a speaking gig on hope I did at church that winter and broke my talk down into three separate devotions. Melody, a singer and songwriter, took the reins when it came to worship and music, playing her guitar. Surrounded by smoke from several wildfires, we had eight ladies at this retreat. In the end, it was a huge success and all participants showed interest in coming the following year.

Which brings us to June 23, 2016. Melody and I contacted ladies from last year and invited new ones. By the registration deadline, June 18, sixteen cowgirls were signed up. Yippee! I got to work, nailing down three devotions dealing with prayer and spiritual warfare while Melody tuned up her vocal cords and fingers (to play keyboard and guitar) for worship.

We contacted ladies for meal sharing as the menu was potluck. I called friends to bring panels and spare horses and nabbed my hubby to help shape up around the ranch. Stalls needed to be set, lawns mowed, tables and chairs set out, flowers purchased and passed on from my neighbor (thank you, Sue), house and corrals cleaned. The list went on and on, but by the morning of June 23, we were ready.

It poured down rain while my hubby cut us firewood, and as the first horses arrived, we were soaked and shivering. But smiles bloomed on our faces anyway, knowing by four that afternoon according to radar reports the drops would cease and riding would begin. Yee haw! And it did.

Friday afternoon ladies settled in and became better acquainted, horses settled in––less squealing over panels, dinner was served, and we saddled up for a nice quiet ride. We rode for about an hour, unsaddled, and dove into devotions and worship music.

Saturday morning came early with feeding animals and humans, saddling up for a long ride, and coming back for a late lunch. After a period of rest and the War Room movie, we made horseshoe wind chimes, leaped in for a second devotion and worship time, ate dinner, went for a quick ride, and enjoyed S’mores and fellowship. My light was off at 12:30 a.m.

6:30 in the morning came all too soon. With heavy eyelids, I drug myself out of bed and ambled to the corral to feed my equally tired colt. Horses hung their heads as they waited for hay. By this time everyone shuffled around with slow steps and small smiles. Some went home after breakfast and devotion and worship while others stayed for the last ride. We rode for an hour and a half. The sun shined and so did our hearts. We meandered home and ate lunch. The last cowgirl hit the 1:30 ferry. I hit the hay.

My dream of the 2nd Annual Cowgirl for Hope Retreat was a success.

There were a few hiccups, but once we switched a couple cowgirls an

d horses, it was smooth riding. I look forward to next June, Cowgirl fellowship, and great rides.

~Happy Trails! Until next year… 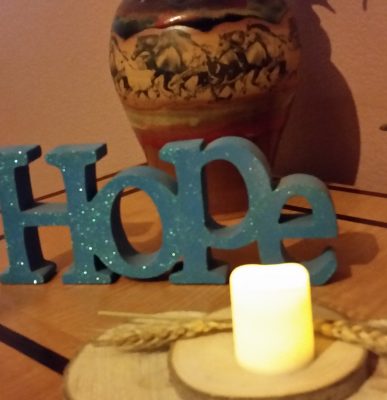