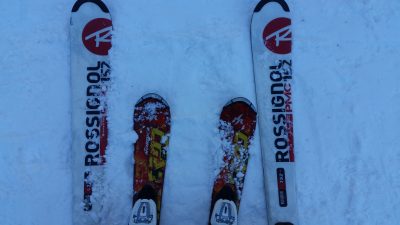 One sunny, winter day at Mt. Spokane, my brother and two family friends thought it would be a good idea for me to cowgirl up and ski down the “big hill.” I was in early elementary and finished morning ski lessons. They convinced me it was safe to ride the ski lift with them, which I questioned, and they promised to bring me down safe and sound with their help, of course.

I still am not sure where our folks were that morning, but none the less, my brave side convinced me it was okay to trust these hooligans. We rode the chairlift to the top of the hill, skied down the exit ramp, and settled in at the top of chair two. My legs trembled as I watched older kids take off down the steep slope.

The boys must have picked up on my less than brave face. So my brother took hold of one arm, one of our friends took hold of the other arm, and the third friend, all guys, went behind me, holding onto the back of my ski jacket.

It took a while, but we made it down. I found my mom and bragged how the boys helped me come off the “big hill.” Her face turned read and she took off, hunting them down. 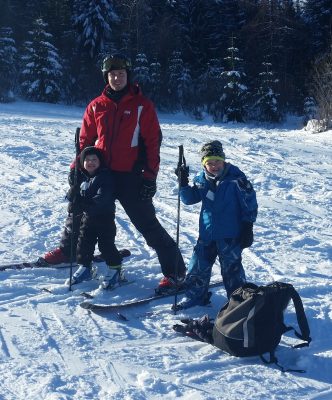 When my sons were in kindergarten, they learned to ski. Our school had a ski club and I was one of the chaperones. Back then, group tickets were ten dollars and we used equipment provided by the club.

My boys had lessons because I lacked the patience to teach them. In the morning we adults skied with the older kids and after lunch, we’d hit the bunny hill with the beginners.

This year, two of my grandsons began to ski at 49 Degrees North in Chewelah, WA with their dad who is my son. To my surprise, he decided to teach them himself and is doing a fantastic job.

I hit the slopes with them while on Christmas break. What a hoot. I can tell you Cody, has much more patience than I had with him and his brothers. By the time I met up with them, Cody had already taken the boys on the tow rope several times and the six-year-old was ready for the bunny hill. I stayed with the three-year-old while Cody and Carter skied chair one.

Cameron and I played and had snacks near chair one for a couple runs. Then Cody announced it was time for all four of us to go up. I looked at the three-year-old, at Cody, and lifted a brow.

Cody assured me both boys were ready. So up we went. I rode with the six (one month shy of seven) year old and oh did it conjure up memories. And I can assure you, for me anyhow, riding up with my grandsons was different than riding up with my sons at that age. 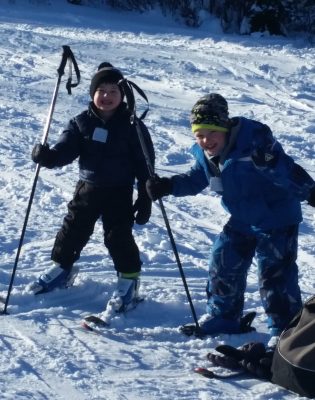 We got on the lift and a dizzy spell came over me. For some reason, I was fine with my sons at this age. It was a different story now. Perhaps it was my age. Or the fact my three-year-old grandson was in the chairlift behind us. Nevertheless, butterflies bumped around in my tummy. I used a pole (my son and I split the poles) as a brace to keep Carter in his seat as if we were riding a Ferris wheel at a carnival. After a bit my nerves settled.

When off the lift, we gathered at the top. I took the youngest and placed him in between my legs with a pole in front of him to keep him from getting away. Cody did the same with the oldest. 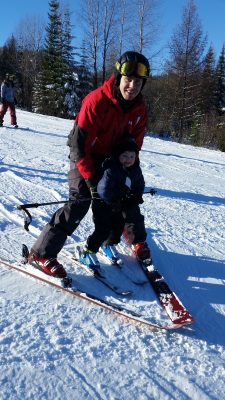 And down we went.

In all the years I’ve learned a few things concerning young kids and snow skiing: 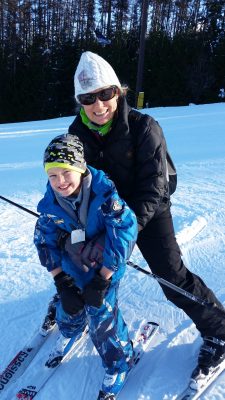 I love how and why Cody teaches his sons to ski.

“I’m teaching them to ski because I want them to learn how to recreate and enjoy the outdoors. A bonus is that it may be something we can always do together. I’m teaching them by putting them between my legs and letting them go out in front of me as they gain their balance and control. The first thing I taught them to do was turn because you can’t stop if you can’t turn. So far so good.”

~Happy trails. And remember to gallop into adventure.